If you want to learn more about the Caucasian people, their traditions and culture, the city of Derbent is a very good place for you.

Derbent is one of the most ancient «live» cities in the world. The first settlements were founded there in the Early Bronze Age, around 4,000 B.C. The city's ancient name «Caspian Gates» was first mentioned in the 6th century B.C.

Derbent is the oldest cultural center in the Republic of Dagestan and the birthplace of its spiritual culture. Derbent is the place where art, crafts, written language as well as the values of Islam and other world religions spreaded from. Today, Derbent is an outstanding monument of architecture. Its defense complex impresses with its grandeur, mightiness, and power. 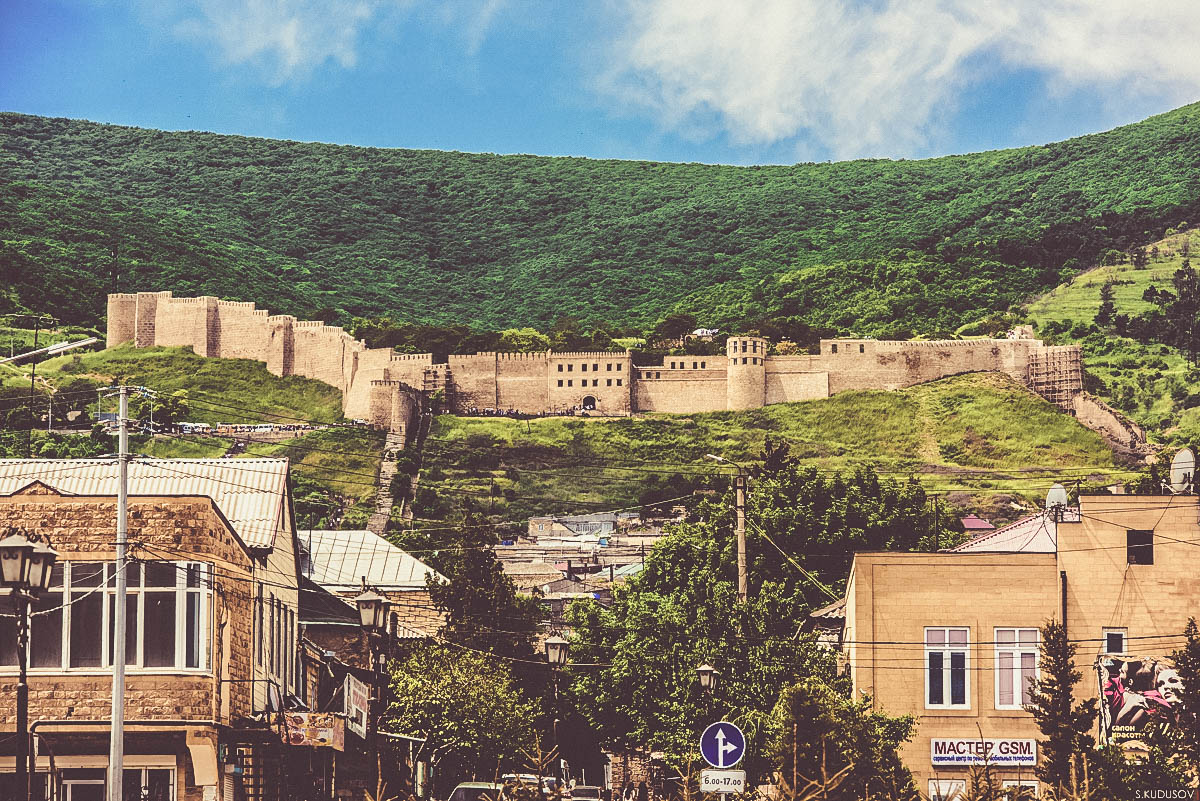 The fortification of Derbent is one of the most popular tourist attractions in the city and in the Republic of Dagestan.

The ancient Greek historian Herodotus mentioned the place in the 5th century B.C. The Roman Empire was greatly interested in the town. It organized its first expedition in 290-281 B.C. In 66-65 B.C., military expeditions to the Caucasus headed by Lucullus and Pompeius took place, one of their objectives was to conquer Derbent In the early Middle Ages. The struggle for the Caucasian region was continued by Byzantine and Iraq.

From the 5th century, the town rapidly grew and fortifications were constructed in order to protect it from nomads’ attacks. In 488-531, stone walls were constructed, and the fortress acquired the outlook preserved till nowadays. A new stage in the development of Derbent was related to the invasion of the Arabs in the 7th century. In 651, the Arabs conquered Derbent but managed to finally assimilate it in the mid 8th century. From that time, the population of Derbent was rapidly turned into Islam. At this time, the Jummah Mosque was constructed.

Derbent was the largest port

Derbent turned into the main strong point of the Arab caliphate in the Caucasus and became its most important political and ideological center. It was the largest medieval town in the Caucasus with developed crafts and agriculture. The medieval Derbent was the largest port on the Caspian Sea, an important center of transit trade between East and West, North and South. Derbent supported tight trade ties with a lot of regions and cities in the Near East and the Middle East, Eastern Europe. In 1813, Derbent joined the Russin Empire.

In 2003, UNESCO included the old part of Derbent with its traditional buildings into the World Heritage List, highlighting the following sites:

The city wall of Derbent is a double wall built in the Sassanid times that went far into the sea forming a port. It is the only preserved monument of the ancient Persian fortification architecture there.

Naryn Kala is an ancient fortress towering over Derbent. Inside, you can see preserved baths, water tanks in case of siege, and the ruins of ancient buildings. The name recalls the Nariqala Fortress in the Georgian capital Tbilisi which was also built by the Persians.

The Jummah Mosque is the oldest mosque in Russia. This temple was captured by the Arabs and converted into a mosque. That’s why this mosque has an entrance from the south rather than the north. In front of the mosque, there is a madrassa of the 15th century. The combination of unique monuments of history, architecture and archaeology together with wonderful natural landscapes and favorable climate make the whole region an important center of domestic and international tourism. 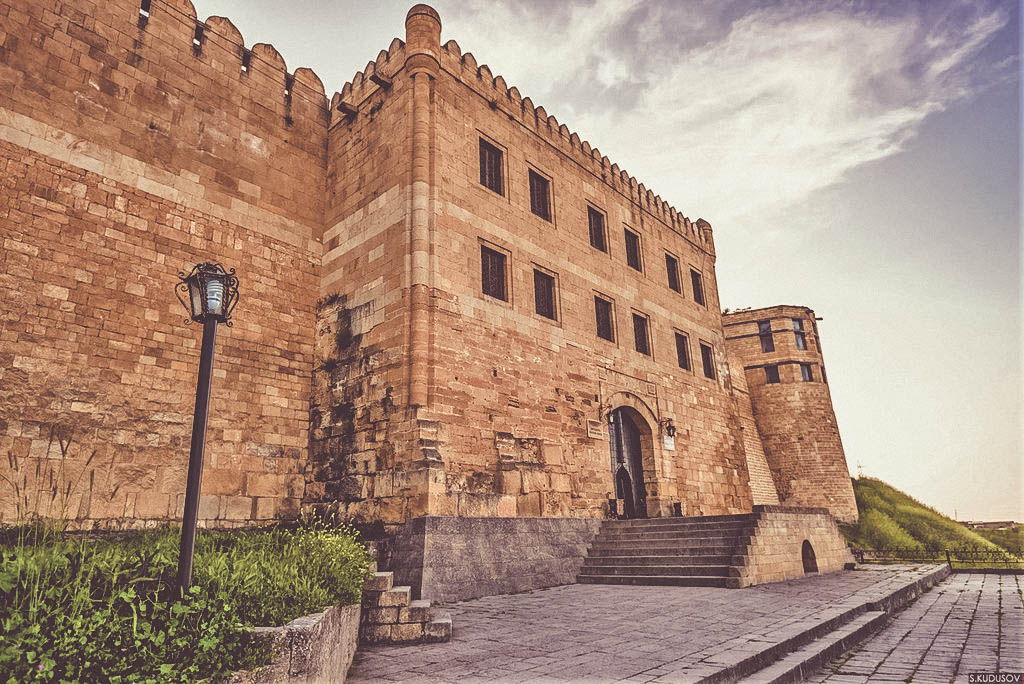 The immense Derbent City Wall is up to 20 meters high and up to 3 meters thick.

Interested in a private tour to Derbent or to any other place in Dagestan? Tell us about your wishes and get an offer without obligation. 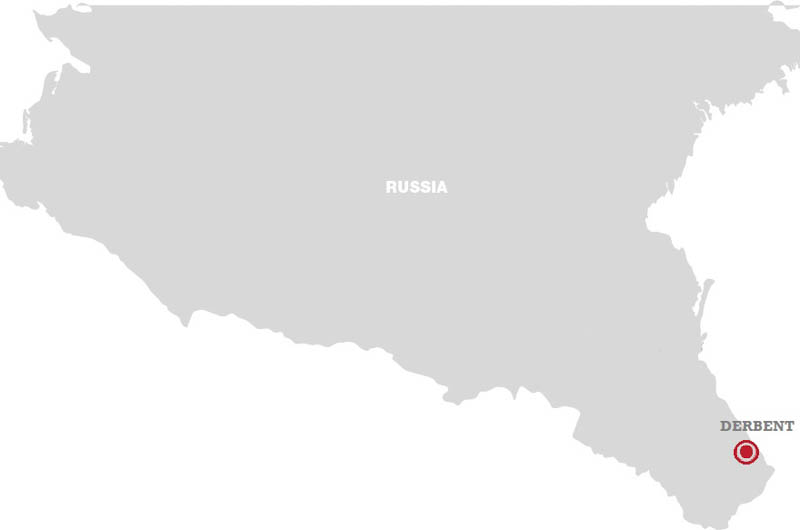 How to get to Derbent

There are minibusses from Makhachkala to Derbent.The trip takes around 3 hours. The price for a one-way ticket is between 3 and 5 USD.

The closest airport is the Makhachkala International Airport. From there it takes you a bit more than 2 hours to Derbent.

You can travel by train from Makhachkala to Derbent, which takes around 2 hours and 20 minutes. Prices from 12 to 30 USD.

Things to do in Derbent

The Citadel, Ancient City and Fortress Buildings of Derbent were part of the northern lines of the Sasanian Persian Empire, which extended east and west of the Caspian Sea. The fortification was built in stone. Read more ...