Stalin, the most famous Georgian in history

It was in 1878 that a little Georgian boy named Ioseb Besarionis dze Jughashvili was born in Gori. 49 years later, the son of a shoemaker was the sole and absolute ruler of the USSR: Joseph Stalin.

The Joseph Stalin Museum in his birthplace is divided into three sections: His birthplace, his personal railway carriage and the actual museum.

In the Joseph Stalin Museum, the entire career of the former Soviet ruler can be traced – from his birth in Gori to his ascent to becoming the leader of the USSR and his death in 1953. The first of six rooms, located on the upper floor, is dedicated to Stalin's childhood and youth, his first revolutionary activities in Georgia and his various imprisonments under tsarist rule. The young Stalin was imprisoned seven times, six of them in Siberian exile.

In the other rooms, visitors can view various personal items of Joseph Stalin, including an extensive collection of gifts received by the long-time head of the CPSU, from other Bolsheviks, or from leaders of other countries, numerous pipes and cigars. Even his first office inside the Kremlin has been reconstructed. One of Stalin's twelve death masks is on display in the last room.

When the Stalin Museum was opened in 1957, only four years after the dictator's death, of course, there was no critical examination of the former ruler in the museum. But even today, more than 60 years later, not much of this can be felt. There is a small area which deals with Stalin's political repression. But that’s all.

The birthplace of Joseph Stalin

Next to the actual museum is Joseph Stalin's small birthplace, where he was born in 1878 as the son of shoemaker Besarion Jughashvili.

In addition, Joseph Stalin's personal railway car has been on the site since 1985. The dictator used the 83 tons heavy, green and armoured monster against possible attacks starting in 1941. Among other things, he travelled to the Yalta Conference in this car.

Are you interested in a private tour to Gori or to any other place in Georgia? Tell us about your ideas and immediately get an offer without obligation from us. 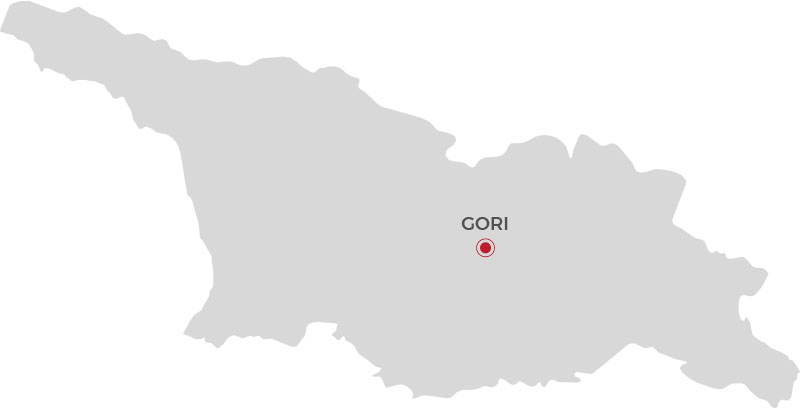 The ride from Tbilisi to Gori takes about 1h 15min by car. The Joseph Stalin Museum is located in the city center, inside the Stalin Park.

There are daily connections by Marshrutka from Tbilisi (Didube station) to Gori. The minibusses are working from 7 a.m. to 8 p.m. The ride costs 3 GEL.

The closest airport is the one in Tbilisi. From there it takes 90 minutes by car. We recommend circumnavigating the Tbilisi reservoir northerly in order to avoid the city's traffic jam.

From Tbilisi, there are up to eight daily connections to Gori. The trip takes between 56 min and 1h 14 min. From the train station to the museum it takes up to 30 minutes on foot.