With a population of around 1.3 million, Tbilisi is not only the capital of Georgia but also the largest and most populous city in the country and its economic and cultural center. Tbilisi has a total of 33 theatres, 12 major museums and numerous other cultural institutions.

The most important theatres are the Griboyedov Theatre, where Russian dramas have been performed since 1845, and the State Academic Theatre Shota Rustaveli, founded in 1921. The main museums are the National Simon Janashia Museum on Rustaweli Street and the State Museum of Arts on Freedom Square (Tavisuplebas Moedani). 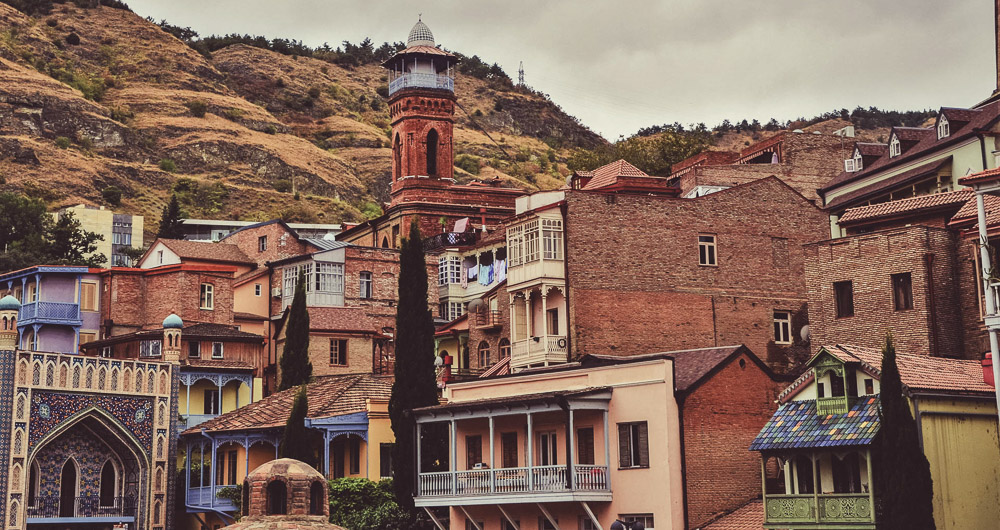 Abanotubani is one of the oldest districts in Tbilisi. It is famous for its sulfur baths.

The Festivals Tbilisoba and Art Gene

Throughout the year, Tbilisi hosts numerous cultural festivals that are well worth a visit. Tbilisoba is one of the most important and most popular events among the locals. The capital city festival takes place every last weekend in October in the old town and in Rike Park. Surrounded by a festive, exuberant atmosphere, numerous open-air concerts and performances are presented. Everywhere, traders sell handicrafts, delicious traditional food and Georgian wine.

The Art Gene festival takes place every summer in various places in Georgia – including Tbilisi, of course. The festival is dedicated to Georgian music, dance, culture and traditional crafts. The musicians inspire the visitors with their concerts, craftsmen present their art and give courses and you can taste Georgian food everywhere. The Art Gene Festival is the ideal event to immerse yourself in Georgian culture.

At night, there also is a lot going on in the Georgian capital. Those who come to Tbilisi for the first time as a tourist will inevitably end up at Shardeni Street, a party mile consisting of two parallel alleys full of restaurants, bars and clubs when visiting the old town in the evening. The audience mainly consists of tourists, the prices are relatively high and the service of reasonable quality.

Aghmashenebeli Street on the other side of the river Mtkvari is similar, but a little quieter. It was partly made car-free and now there are also bars and restaurants lined up.

Of course one should have a look at these two streets. But the authentic nightlife takes place elsewhere, as you can read in our tips. 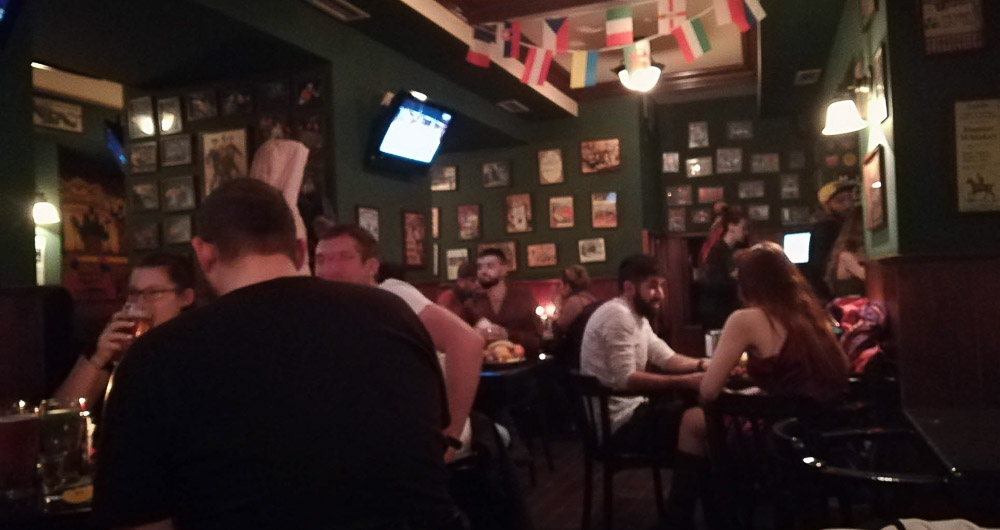 An Irish Pub located in Shardeni Street in the old town.

Based on the recipes of a more than 100-year-old cookbook by Barbara Jorjadze, the Barbarestan Restaurant team spoils its guests with old, traditional Georgian dishes that in this form cannot be found anywhere else in Georgia. The atmosphere in the vaulted cellar is unique, the furnishings are vintage and the service is outstanding. Most of the seats are inside. There are only 2-3 small tables outside. Address: Davit Aghmashenebeli avenue 132, Tbilisi

The Meama in the old town of Tbilisi is a new restaurant. The restaurant, which is located in one of the historic houses with blue balconies, is enchanting even at first glance. But the food, mostly traditional Georgian dishes, which are interpreted in a new and modern way, is excellent as well. What you should definitely try with the internationally renowned chef, Levan Kobiashvili, are his modern creations of the Ajarian specialty Kaimagi or Pelamushi cakes. The 75-percent Chacha served in the Meama is not for the faint-hearted. Address: Dzmebi Zdanevichebi Street 8, Tbilisi

The Shavi Lomi, «black lion» in English, opened in 2011 and is a real eye-catcher right from the very first glance: The interior, which is reminiscent of a mix of flea market and art gallery, and the beautiful, secluded garden give the guests a pleasant feeling. The Shavi Lomi serves traditional dishes of Georgian cuisine on the one hand, but on the other hand, guests can also enjoy newly interpreted dishes. Address: Zurab Kvlividze Street 28, Tbilisi 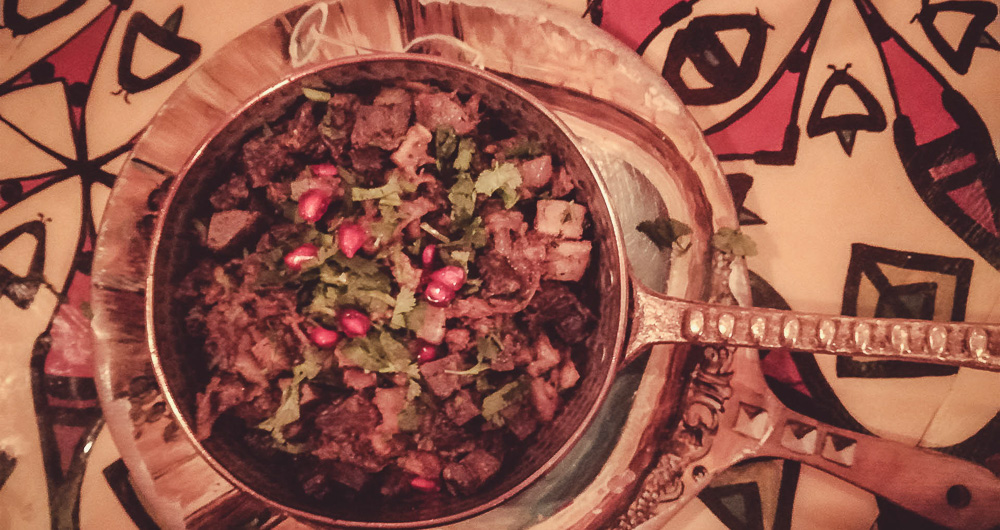 If you want to turn night into day, we recommend a visit to one of the following bars or clubs.

Bars and clubs in Tbilisi

The Bassiani is the largest and certainly one of the most popular clubs in Tbilisi. It is located directly below the football stadium «Dinamo Arena». Top DJs from all over the world regularly play in the Bassiani. Address: Akaki Tsereteli Avenue 2, Tbilisi

The Cafe Gallery is located more or less directly on Shota Rustaveli Street, a few meters from Rustaveli Metro Station. During the day, the Cafe Gallery is a cozy, vintage-style café. At night, however, the tables are cleared away and the lamps pulled up to the high ceiling, turning the place into one of the city's hottest clubs. Address: Alexander Griboedov Street 34, Tbilisi 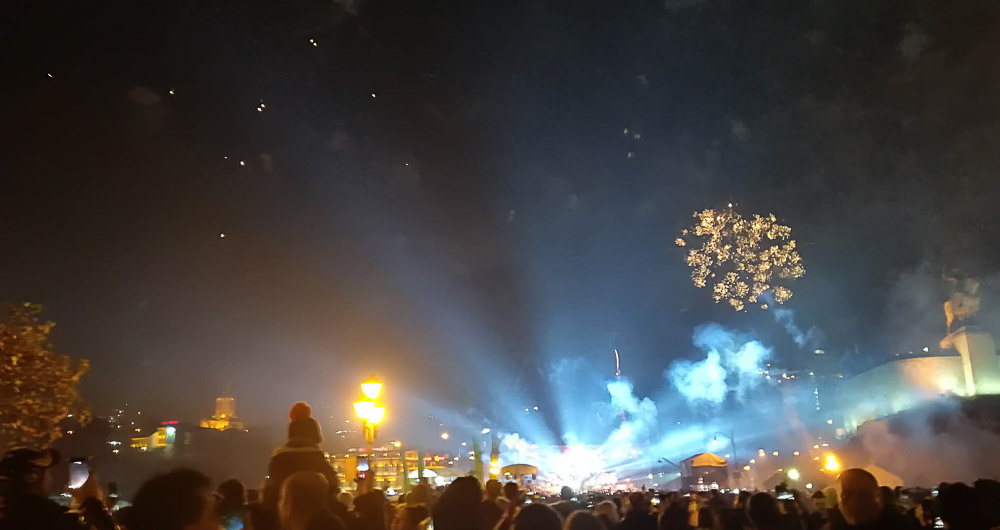 Loud and crazy: The New Year's Eve party in Tbilisi.

A history full of conquests

Tbilisi was not always so vibrant and full of life. After Persians had left their first traces in the 4th century with the construction of the Nariqala fortress on Tbilisi's present territory, the Georgian king Wachtang Gorgassali I conquered the town in the 5th century, turned it into a city and made Tbilisi his capital.

Over the following centuries, Tbilisi was conquered several times: Arabs, Persians, Byzantines and Seljuk invaded the city successively. After Davit Aghmashenebeli, known as David the Builder, succeeded in liberating Tbilisi and making it one of the richest cities of the Middle Age, it was devastated again in the 13th century by the Choresmians. Tbilisi then belonged to the kingdom of Timur Leng (also known as Tamerlan). Two invasions by the Turks followed before the city was conquered by the Persians in 1795 and completely destroyed during the Battle of Krtsanisi.

The eventful history of the city and the entire country, marked by hostile takeovers, was far from over: in 1801, Georgia was annexed by the Russian Empire. Between 1918 and 1921, the country was able to regain its independence as the Democratic Republic of Georgia, but this was followed by 70 years of membership of the Soviet Union.

After Georgia declared itself independent again on 9 April 1991, difficult years followed for the small Caucasus republic and its capital Tbilisi: poverty, a devastated economy, crime, corruption and high unemployment depressed the mood in Tbilisi in the 1990s. Since the millennium, however, the city – and the whole country – has been on a continuous upward trend.

Tourism in Tbilisi is booming.k

The whole economy has developed well in recent years, especially tourism. More and more tourists come to Tbilisi every year to admire sights such as the historic old town with its colorful wooden balconies, the Nariqala fortress, or the Tsminda Sameba church. More and more people want to profit from the boom. Hotels and guesthouses are springing up like mushrooms and the builders are trying to outdo each other with larger and more modern buildings. Every medal has two sides, it is no different in Tbilisi.

Are you interested in a city tour in Tbilisi or a private tour to Georgia or to any other place in the Caucasus region? Tell us about your ideas and immediately get an offer without obligation from us. 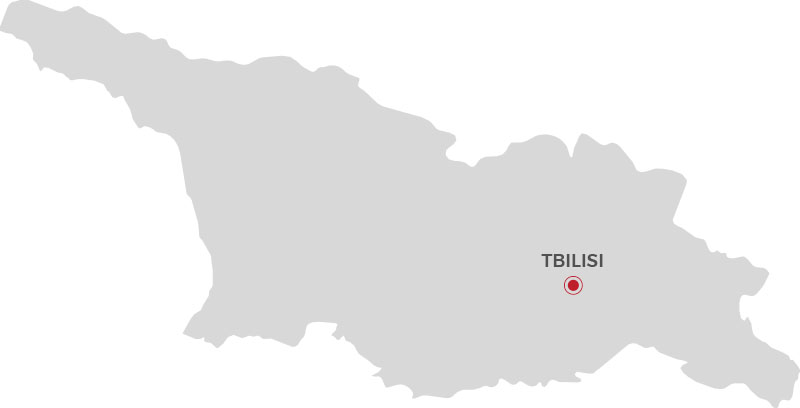 How to get to Tbilisi

The best route to Tbilisi from Western Europe is via Balkan, Bulgaria and Turkey. We don't recommend the route via Ukraine and the North Caucasus (Russia).

There are regular minibus connections to Tbilisi from nearly every city and village in Georgia. It's the cheapest way to travel in Georgia.

A large number of airlines fly to the Tbilisi International Airport. Amongst others, there are direct flights from Athens, Brussels, Istanbul, London, Kiev, Moscow, Munich, St. Petersburg, Tel Aviv, Warsaw and Vienna.

There are several train connections from different countries to Tbilisi.

Things to do in Tbilisi 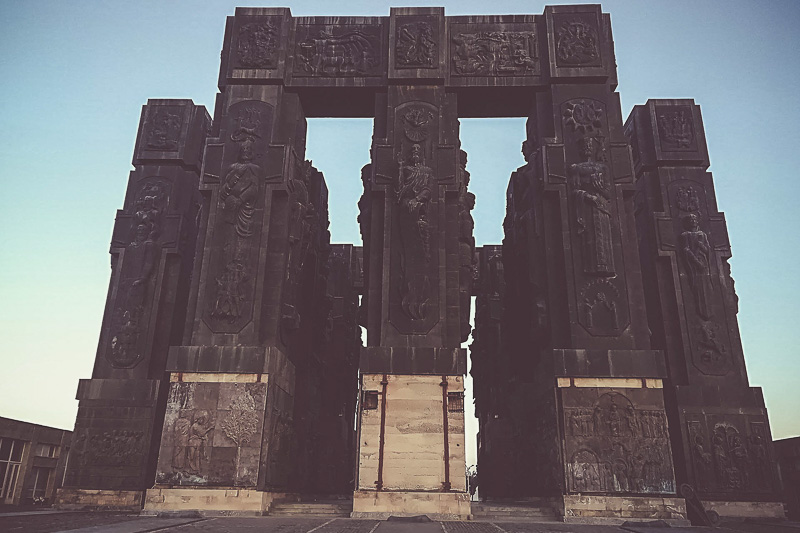 Located at the northwestern end of the Tbilisi reservoir, the Chronicles of Georgia monument tells all the important aspects of Georgian history and offers a fantastic view of the city of Tbilisi. Read more ... 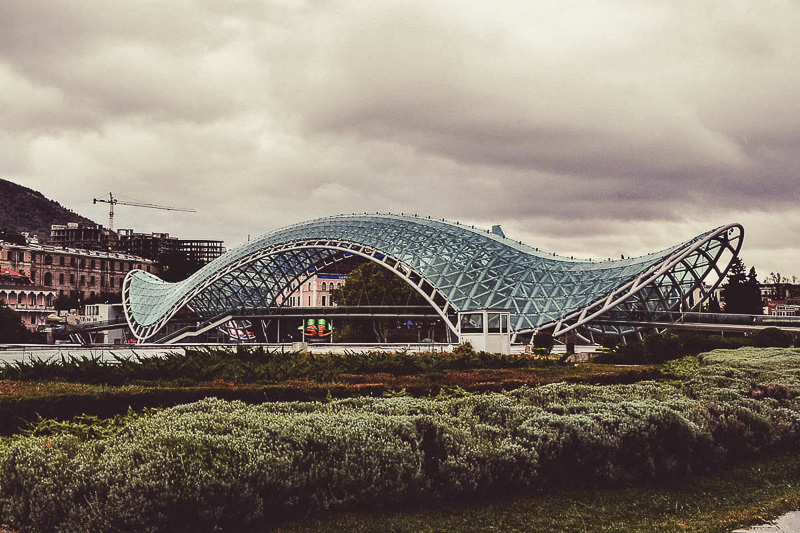 At night, the Bridge of Peace, which in Georgian is called Mshvidobis Khidi, is particularly worth seeing because more than 1,000 LEDs will then provide a fantastic play of light. Read more ... 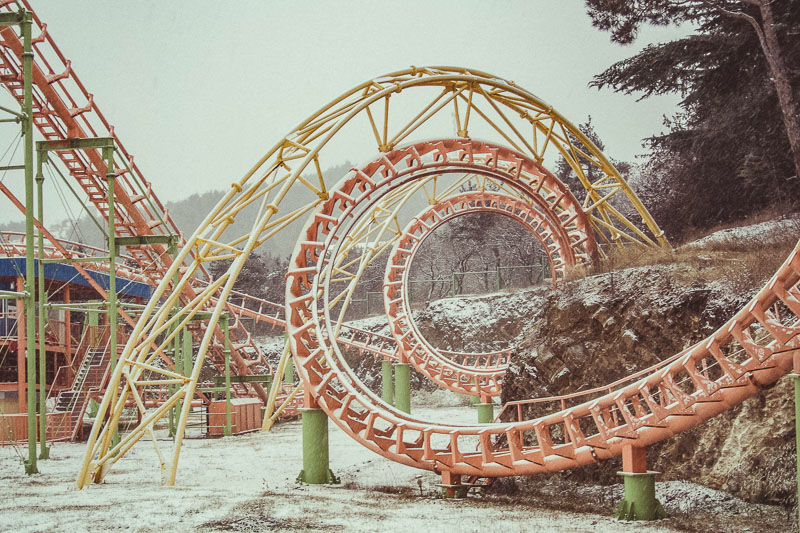 The «holy mountain» Mtatsminda with its TV broadcasting tower on top is visible from every corner in Tbilisi. Up there you can find a lot of entertainment. Read more ... 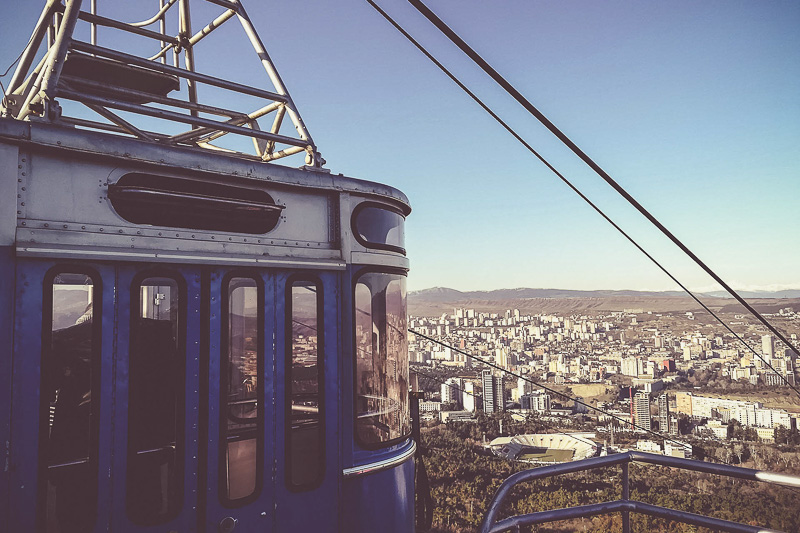 For those who find it too hot in summer in Tbilisi, Turtle Lake – situated on a hill above the city – provides plenty of cooling and fresh air. Read more ... 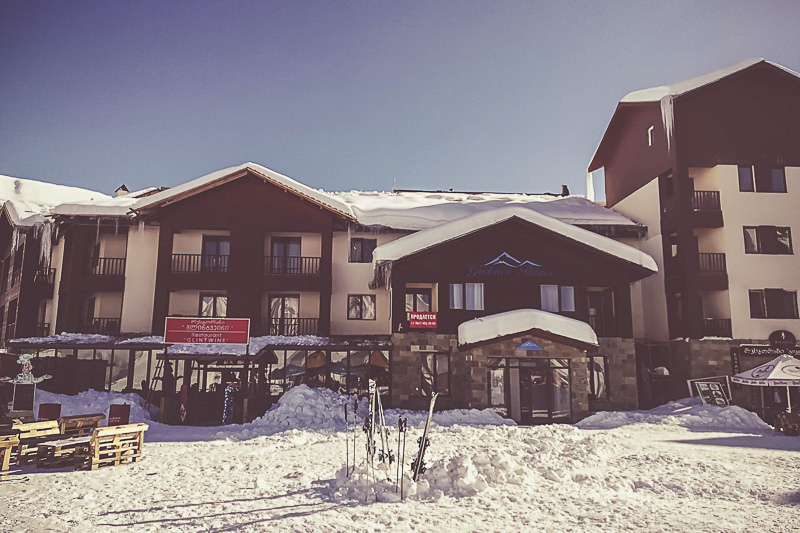 Khachapuri instead of «Bratwurst»: Winter sports in Georgia is an exciting alternative to the Alps. Discover the 5 Georgian ski resorts in the Caucasus mountains. Read more ... 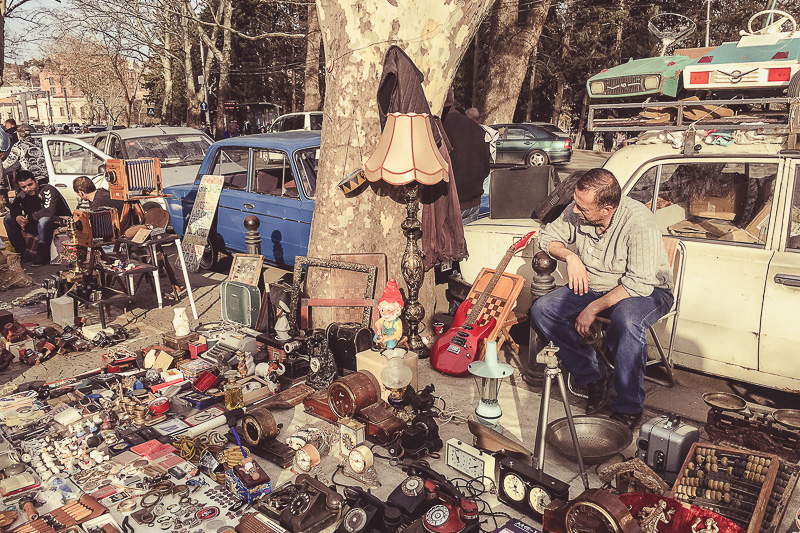 The Dry Bridge flea market is located on, below and next to the centrally located Dry Bridge. At the market, you can buy almost everything. Read more ... 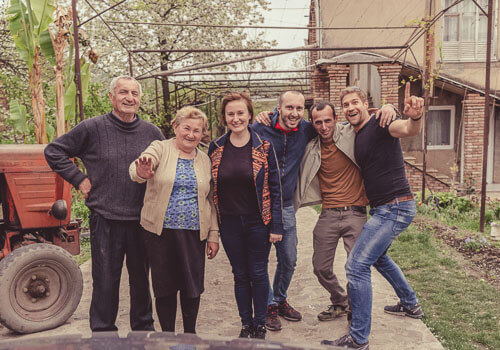