Outdoor paradise in the north of Georgia

Stepantsminda is located on the river Terek, about 150 km north of Tbilisi, at an altitude of 1,740 metres. Surrounded by mountains, it is a popular starting point for hikers and other outdoor sports enthusiasts. In good weather, you can even see one of the kings of the Great Caucasus from Stepantsminda: Kazbek, the third highest mountain in Georgia at 5,047 metres.

Stepantsminda lies on the Georgian Military Road, the country's most important north-south link. It leads from Tbilisi via Gudauri and Stepantsminda to the northern Caucasian city of Vladikavkaz, which belongs to Russia. 12 kilometres north of Stepantsminda, you will find the border crossing «Larsi», in front of which the trucks sometimes queue for kilometres. 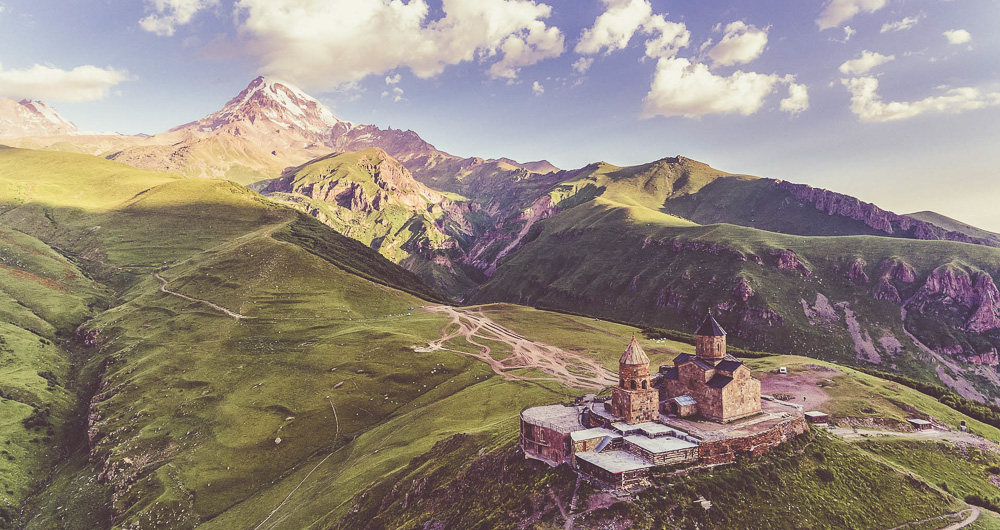 High above Stepantsminda, the Gergeti Trinity Church overlooks the valley.

You may have noticed already: When the village is reported on, sometimes the name «Stepantsminda» is mentioned or sometimes the name «Kazbegi». The following is correct: The village itself is called Stepantsminda, and the municipality which it belongs to is called Kazbegi. In addition to the main town Stepantsminda, the municipality includes Gorisziche, Gudauri, Kobi, Sioni and Sno, five other communities, which in turn consist of several villages. Put simply, this means Stepantsminda = village and Kazbegi = region.

But where does all the confusion come from? Originally the village was called «Stepantsminda» after a Georgian Orthodox monk, which means «Saint Stephen». In 1925, when Georgia was part of the Soviet Union already, the place was renamed to «Kazbegi» – because of the famous poet Alexander Kazbegi. Finally, in 2006, the place was renamed «Stepantsminda» again, and the surrounding municipality kept its name «Kazbegi». 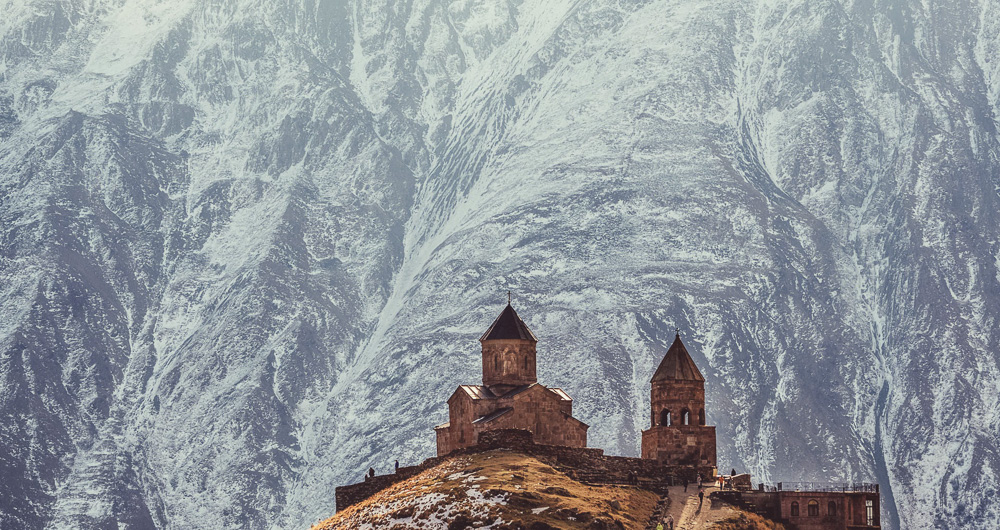 More and more tourists in Stepamtsminda

Stepantsminda attracts more and more visitors every year. Day tourists visit the place mainly to see the Gergeti Trinity Church, one of the most famous churches in Georgia and one of the most important photo sites in the country. For those who have more time, Stepantsminda and its surroundings (now «Kazbegi» would be correct) offer a variety of activities: Hiking, mountain biking, horse riding, paragliding or climbing the surrounding mountains. 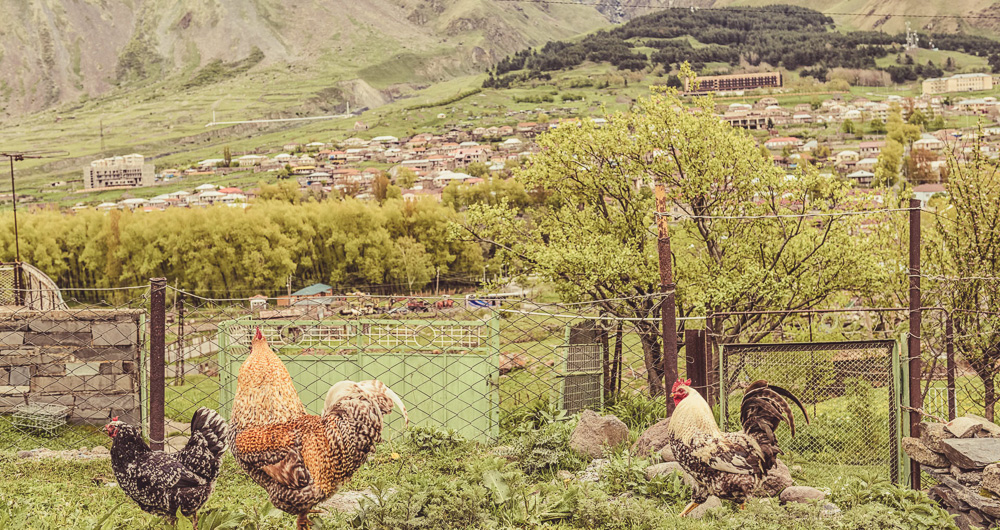 Stepantsminda is the gateway to Khevsureti

Stepantsminda is also an ideal starting point for trekking tours. As there is a wide range of hotels and guesthouses in the village, many tourists spend the night here before they go on a trekking tour the next morning. 20 kilometres southeast lies the village of Juta, from where the ascent to the Chaukhi Pass begins. Behind the pass, there is the hiking paradise Khevsureti.

Are you interested in a tailor-made private tour to Stepantsminda (Kazbegi), Georgia or to any other place in the Caucasus region? Tell us about your ideas and get an offer without obligation from us. 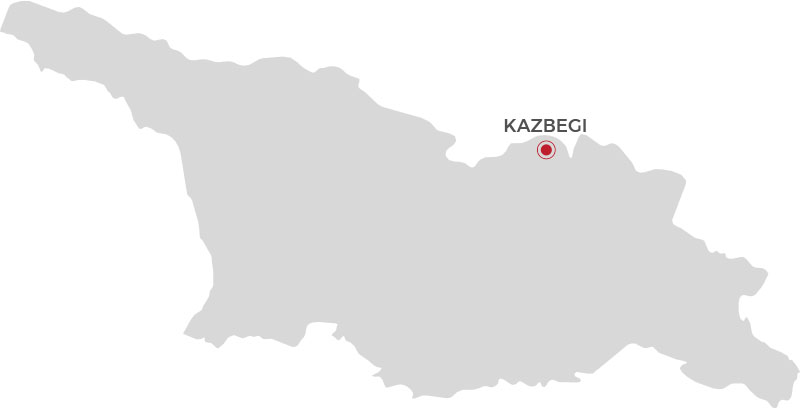 How to get to Stepantsminda

The 150 km from Tbilisi to Stepantsminda takes about 2h 45min. The road conditions are good. On the way, it is worth to stop and visit the Ananuri Fortress and the Russia-Georgia Friendship Monument after Gudauri.

There are hourly marshrutkas (minibusses) from Tbilisi (Didube station) to Stepantsminda. The trip costs 10 GEL. If you carry a lot of luggage or some trekking equipment, you may have to pay more.

From the International Airport Tbilisi, it takes 3 hours to get to Stepantsminda.

It's not possible to reach Stepantsminda by train, as it is not connected to the railway system.

Things to do in Stepantsminda 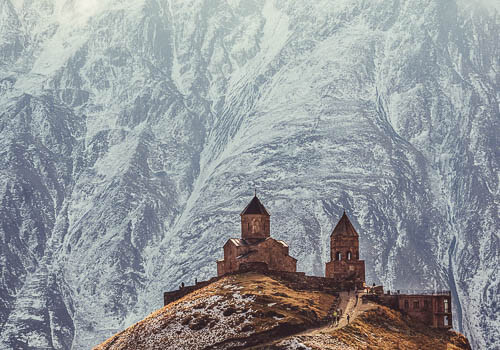 The Gergeti Trinity Church is located at the foot of the legendary Mount Kazbek, above Stepantsminda at an altitude of 2,170m. The church is a popular waypoint for trekkers. It can be reached by a steep 1.5-hour climb up the mountain or by car. Read more ...