The village of Omalo lies in the mountainous region of Tusheti n northern Georgia, which politically belongs to the municipality of Akhmeta in Kakheti. The largest village in Tusheti, Omalo, is its administrative center.

Omalo is located at 1,880 meters above sea level and is only connected to the rest of the world via the «Tusheti Road». However, this road is closed during at least half of the year, which is why Omalo can usually only be visited between May and September. 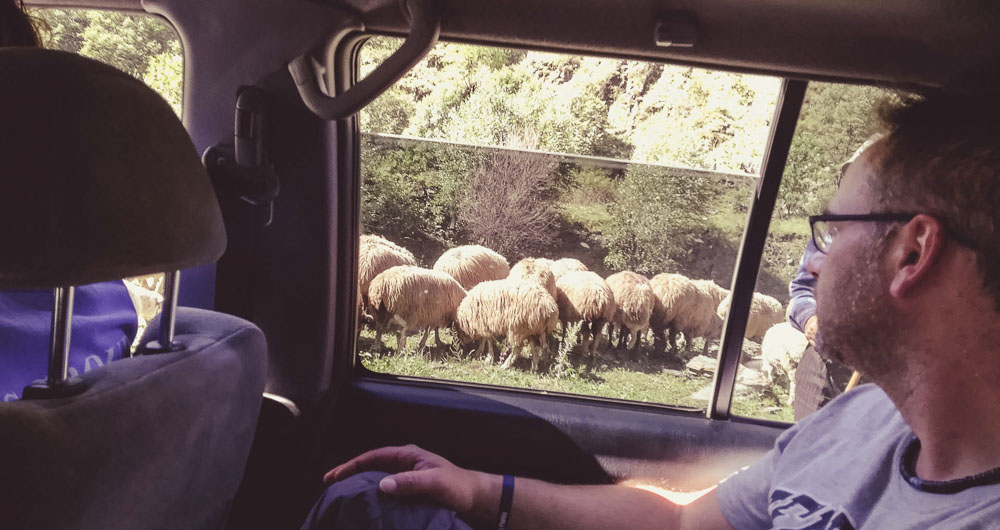 Passing a herd of sheep on the way to Omalo.

An adventurous way to Omalo

Those who suffer from fear of heights will not like the bumpy ride on the «Tusheti Road», which takes two to two and a half hours. At various points, the almost vertical slopes lead into gorges several hundred meters deep. What is definitely needed on the «Tusheti Road» is a 4x4 vehicle that is suitable for off-road use and works perfectly.

However, we recommend not only renting the car, but also a local, experienced driver with local knowledge. This way, handling the track is no problem at all. After all, the «Tusheti Road» is not as dangerous as it is portrayed in some media or blogs. 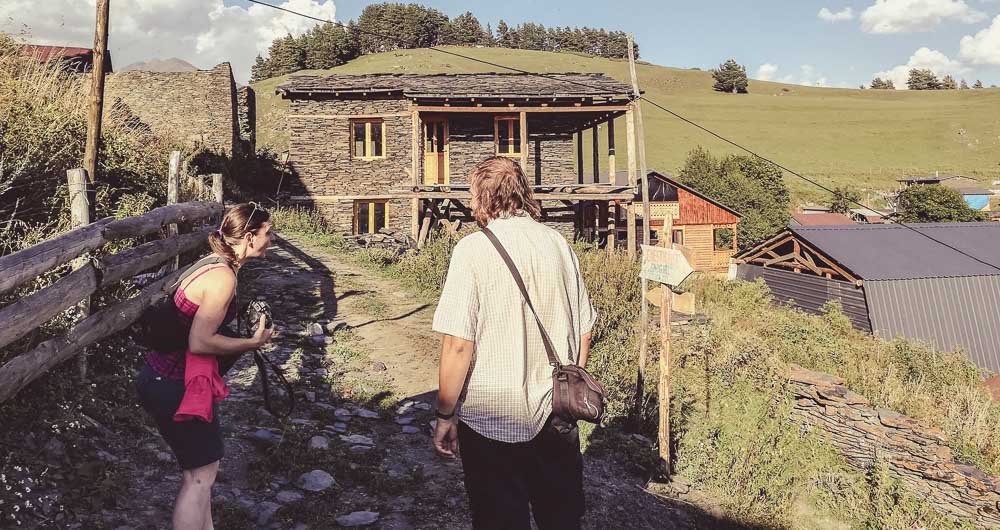 Our guests are exploring the Tushetian village of Omalo.

The Keselo Fortress above Omalo

The Tushetians, as the population of Omalo and the whole of Tusheti is called, had always sought refuge in their defensive towers during hostile attacks. This was also the case in the 1230s during the invasion of the Mongolians. At this time, the fortress Keselo was built. And it still remains there today on a steep hill above the upper part of the village.

Keselo originally consisted of 13 towers, most of which turned into ruins over the centuries. It was not until 2003 that a private initiative of two Dutch people living in Georgia began to rebuild the towers. Later, the Keselo Foundation was founded, which helped to rebuild the Keselo Towers according to the old Tushetian tradition. Today, the Keselo fortress is a popular tourist destination and without question one of the highlights in Omalo. 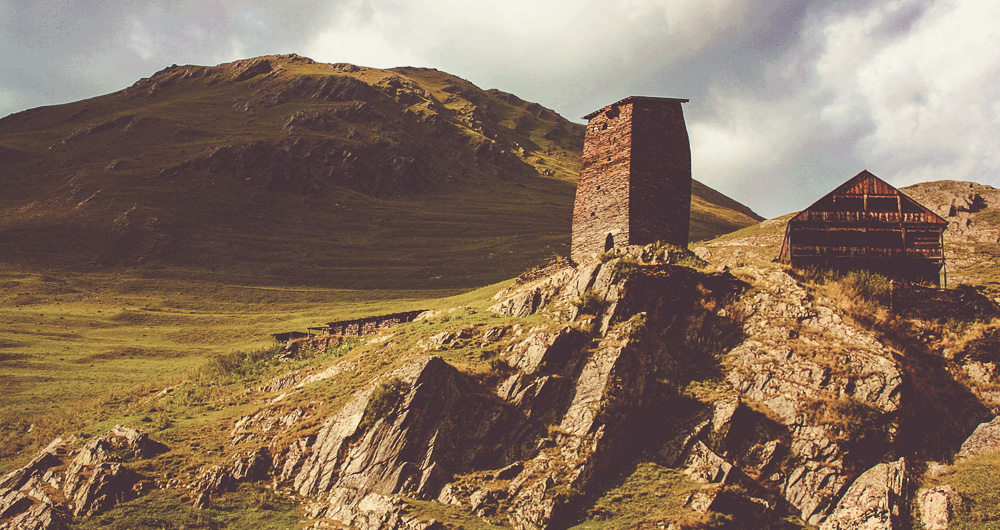 Omalo is the main village and one of the gems in the mountainous region of Tusheti.

Omalo is ideal for hiking tours

Omalo is the ideal starting point for various outdoor activities such as mountain biking or hiking. In the inhabited villages, there are simple accommodations. But as it is allowed to pitch a tent everywhere anyway, it is advisable to camp outdoors.

For example, one can start a several day hikes from Omalo across the National Park of Tusheti to Shatili in Khevsureti. Passing medieval villages like Dartlo, Dano, Chesho, Parsma and Girevi, the last village in the valley, the trail leads over the more than 3,400 meters high Atsunta Pass down to Khevsureti and Shatili. Depending on your fitness level, you should plan five to eight days for the 75 km long hike. July and August are ideal.

A very beautiful 12km long hike, which can be completed in one day, leads from Omalo via Chachabo and the 2,551-meter high Apakurta Pass to Goglurta. In Goglurta, there is a small guesthouse. 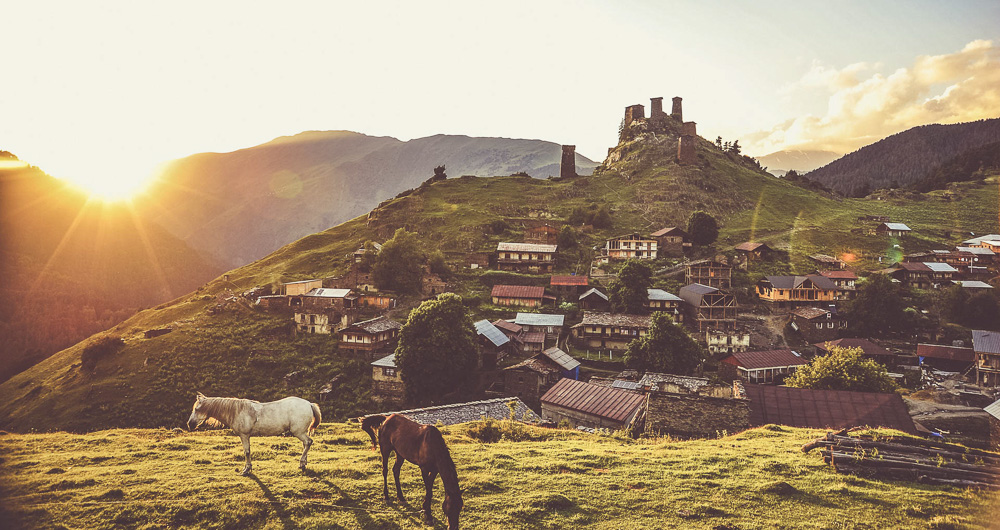 The Keselo Fortress is overlooking Omalo and the surrounding Tushetian landscape.

Private tour to Omalo in Tusheti

Are you interested in a tailor-made tour to Omalo or to any other place in Tusheti? Tell us about your ideas and immediately get an offer without obligation from us. 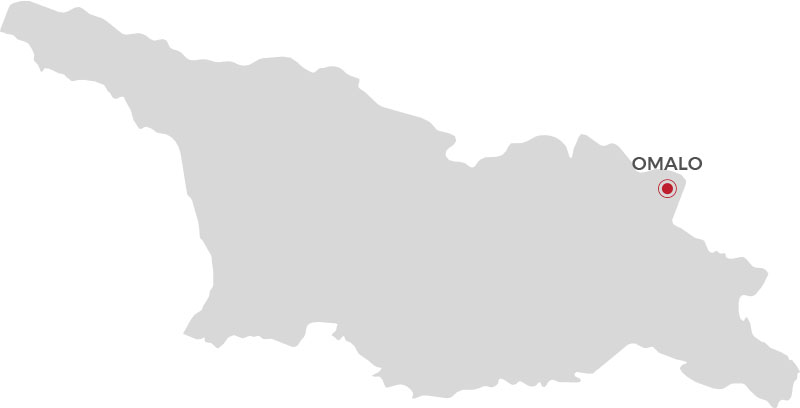 How to get to Omalo

It takes 4.5 hours by car from Tbilisi to Omalo and 2h 45min from Telavi. The road is not easy and it's only possible with a 4x4 car. We recommend booking a local driver in Kvemo Alvani.

Between Tbilisi and Kvemo Alvani there are regular connections (Marshrutka). From this village, you should book a local driver with an off-the-road vehicle for a safe trip to Omalo.

There are no flight connections to Omalo. You only can go there on foot, mountain bike or by off-the-road vehicle.

There are no train connections to Omalo. You only can go there on foot, mountain bike or by off-the-road vehicle.

Things to do in Omalo