Marneuli is a city located in the south-eastern part of Georgia. The beautiful landscape around Dmanisi is affected by semi-desert and mixed forests as well as small mountains. The winter in this region lasts for 7-8 months.

The city is situated in the historic province of Kvemo Kartli, 420 meters above sea level. From Marneuli, it's not far to the borders with Armenia (Sadakhlo) and Azerbaijan (Red Bridge). Due to its location, Marneuli is very multicultural. In the city and around it there live people from different religions and cultures, who live together peacefully and harmoniously. Marneuli and especially its surroundings are more than a thoroughfare. It is also worth visiting the small city due to different reasons.

Before 1947 the town was known as Borchali. Between 1947 and 1952 the town was known as Sarvan, a name still used in some contexts. The Borchaly Uyezd was a county of the Tiflis Governorate of the Caucasus Viceroyalty of the Russian Empire and then of the Democratic Republic of Georgia and of the Democratic Republic of Armenia with its administrative center in Shulaveri. Now, it is part of Armenia's region of Lori and Georgia's region of Kvemo Kartli. The term «Borchaly» derives from Turcoman tribes that were resettled by Shah Abbas I (1571-1629) along Debed valley, after his successful campaigns against kingdoms of Kartli and Kakheti, that led the formation of several Qizilbash khanates on Georgian territory.

The oldest Qvevri ever found

First of all, Marneuli is well-known for its accidentally discovered archaeological leftovers. For example, in the area, there are still remains of a megalithic fortress and of a medieval church. Furthermore, in the South of Marneuli, there is a village on a hill called Shulaveri which can be reached within 20 minutes by car. Amongst others, in Shulaveri the archeologists found the oldest Qvevri (clay vessel which is used to produce traditional Georgian wine) ever found.

A bit less than 50 km west of Marneuli there is the village Dmanisi, which is world-famous for the fossil skeletons which have been found there in 1991. Those human remains are the oldest ever found outside of Africa. Those human ancestors lived nearly 1.85 million years ago. Before the Dmanisi discoveries, it was thought that the first migrants should have been quite tall, big-brained, and having well-developed stone tools; otherwise, they would not be able to survive out of Africa. However, the Dmanisi hominins contradicted these assumptions: they were physically small and had small brains. Also, these pioneers were armed with primitive stone tools and thus did not possess the well-developed tool-making techniques researchers had expected. Overall, Dmanisi is a remarkable site, preserving not only one of the most important Paleolithic occupations of Eurasia but also a rich archaeological record of  Georgia’s Medieval period.

Dmanisi Museum-Reserve at the archaeological site of Dmanisi is seasonal. It is open for visits daily except Mondays and public holidays from late spring to early autumn. Opening hours 10:00 to 17:00 (16:30 last entry).

Are you interested in a private tour to Marneuli or to any other place in Georgia and in the Caucasus? Tell us about your ideas and immediately get an offer without obligation from us. 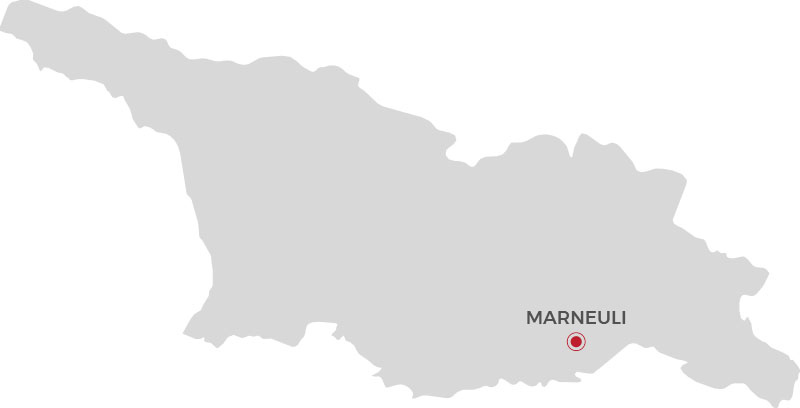 How to get to Marneuli

Marneuli is located around 40 km south of Tbilisi. The trip takes 50 minutes.

There are marshrutka connections from Tbilisi (railway station or Isani bus station) to Marneuli. The trip costs 8 GEL.

The closest airport is the one in Tbilisi. From there, it takes one hour to Marneuli.

Marneuli is not connected to the Georgian railway system.

Things to do in Marneuli