In flying coffins to the underground

Tourists rarely get lost in the city of Chiatura in western Georgia. Too bad, because the Imeretian mining town is unique, especially its public transport. In contrast to other cities, where buses or trams carry the inhabitants, in Chiatura cable cars take over this task.

Most of these ropeways date back to the 1950s, the period in which Josef Stalin was in charge of the USSR. The huge reserves of manganese ore in and around Chiatura had been known for a long time and had been mined since the end of the 19th century, but the Soviets professionalized production in the 1950s and massively expanded the infrastructure. 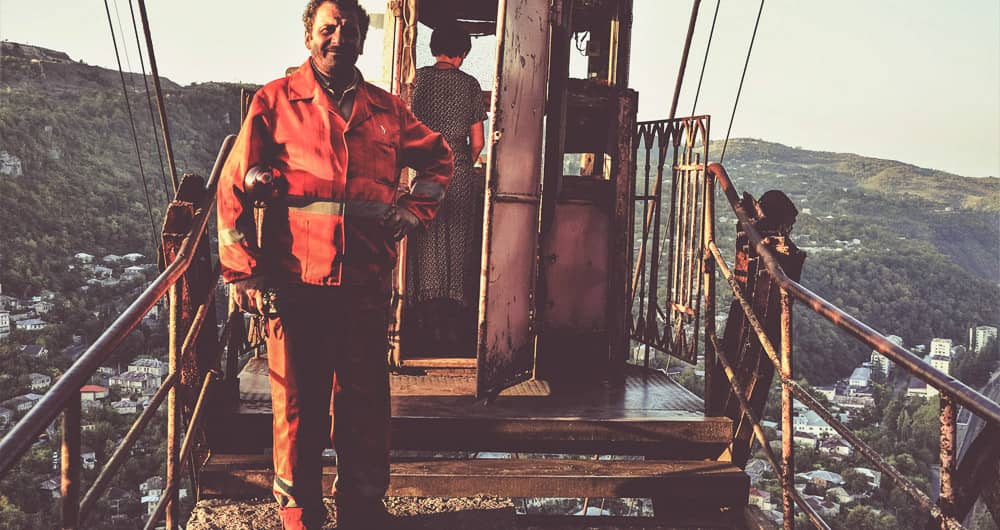 In Chiatura various of those old cable cars are still working today.

Since Chiatura is located in a valley and surrounded by steep hills, it was not easy to transport the workers to the mines and the material from the mines. The solution was cable cars. And the Soviets built 76 of them: 26 cable cars were used to transport people, 50 to transport materials. At that time, Chiatura was the most important manganese mining plant in the world. After the collapse of the giant empire, the entire industry collapsed and many inhabitants left the city. Chiatura had degenerated into some sort of ghost town. The fact that between 1992 and 2004 there was no gas, water or electricity in the city contributed to this.

Today Chiatura has recovered a little. 18 cable cars are in operation, 11 of them for passenger transport. Their use is free of charge. The cable cars are still used today by the miners, but also by all the other inhabitants, whether to do the shopping or simply to get down to the city center. Among the few tourists who visit Chiatura, the «flying coffins», as the locals call their flying tin cans, are also very popular. 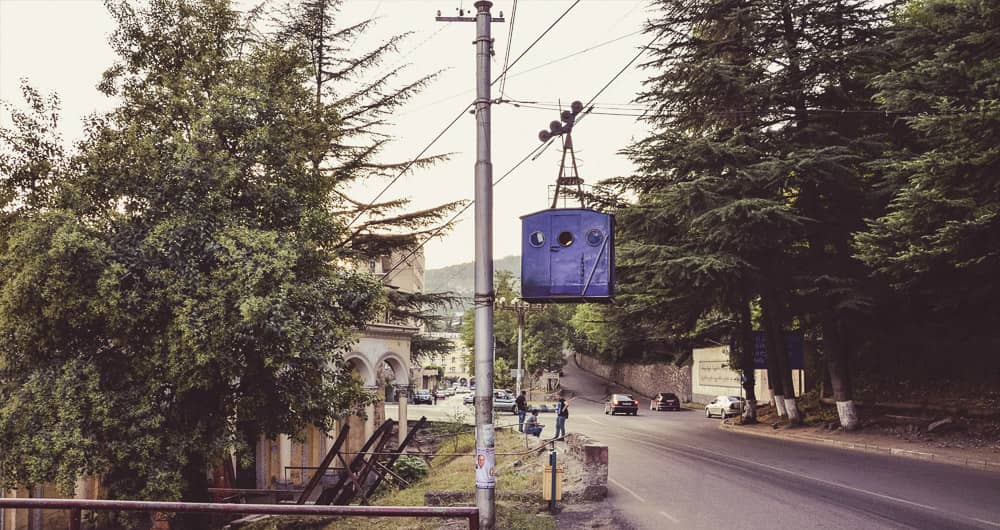 One of the guys in Chiatura who maintains the old cable cars every day.

Katskhi Rock and other rock formations

Chiatura is located in an area rich in limestone caves and other rock formations. The most famous is the Katskhi Rock, 11 kilometers from Chiatura. The 40-meter high monolith dominates the surrounding region in an impressive way. At the top, there is a small church from the 10th/11th century.

Another important monument is the Mghvimevi Monastery, built in the 13th century in a cave on the right bank of the river Kvirila. The main cave is 35 meters deep, the monastery complex can only be climbed through a narrow and long shaft. 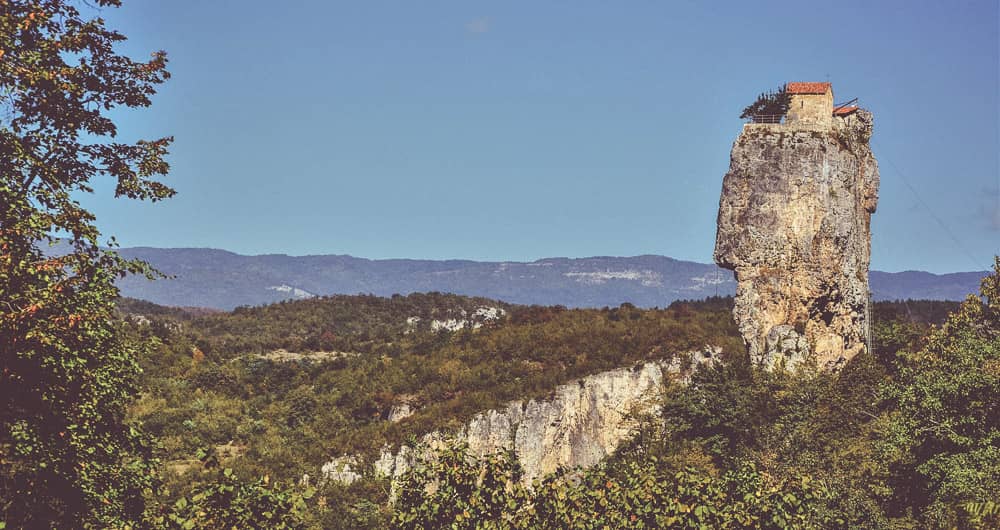 Only a few kilometers west of Chiatura there is the Katskhi Pillar.

Are you interested in a private tour to Chiatura, Georgia, or to any other place in the Caucasus region? Tell us about your ideas and immediately get an offer without obligation from us. 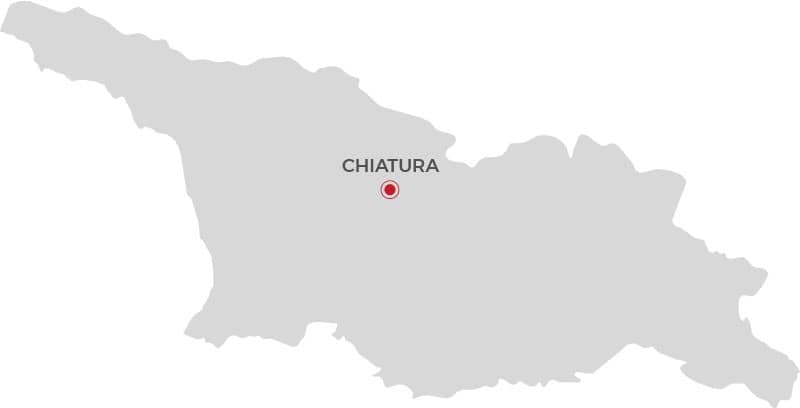 How to get to Chiatura

The 186 km from Tbilisi to Chiatura takes about 2.5 hours by car. From Kutaisi, the trip takes 1h 20min. The roads to Chiatura are in a good condition.

From Tbilisi (Didube station) there are Marshrutkas (minibusses) to Chiatura. The trip takes about 3 hours and costs 12 GEL. From Zestaponi and Sachkhere there are minibusses, too.

The distance from Kutaisi International Airport to Chiatura is 96 km. The journey takes about 1.5 hours.

First, you have to take the train from Tbilisi to Zestaponi. From there you can take a direct train to Chiatura. The train station is located a few hundred meters south of the city center.

Things to do in Chiatura 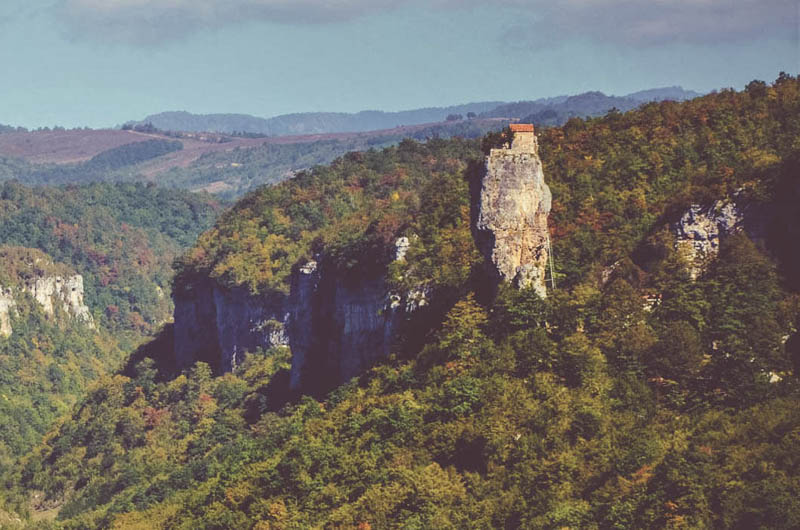 The Katskhi Pillar is a kind of stairway to heaven. The natural monolith near the city of Chiatura is surrounded by ancient legends and myths. With its 40 meters, it overlooks the entire surrounding area. Read more ...