The city of mineral water and medicinal springs

With around 10,000 inhabitants, Borjomi is the second-largest city in the Samtskhe-Javakheti region after Akhaltsikhe. Borjomi is mainly known for its world-famous mineral water, its numerous springs and sanatoriums and its location in the Borjomi-Karagauli National Park.

The many springs in the region were already known when Borjomi (first mentioned in the 7th century under the name «Tori») did not even exist. This is proven by the ruins of a bathhouse discovered by archaeologists. The city was devastated twice in the course of its history: once by the Arabs and once by the Mongols. The Ottomans went even further at the end of the 16th century and resettled the entire population in the Eastern Georgian region of Kartli. 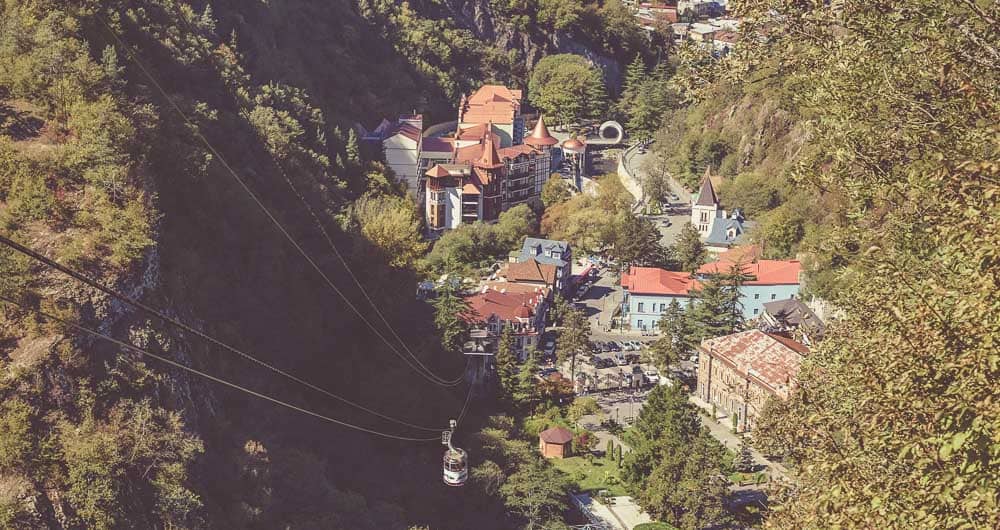 Panoramic view of Borjomi in the Borjomi-Kharagauli National Park.

At the beginning of the 19th century, the city then became part of Russia, which gave it its present name Borjomi. Twenty years later, in the 50s of the century before last, spa tourism began to develop. While in the first years, the guests consisted primarily of the Russian upper class, later the rich and beautiful also came from Persia, Azerbaijan and other countries. Borjomi flourished: splendid villas, spa hotels and parks were built. When Georgia belonged to the Soviet Union, it was one of the most popular holiday destinations for comrades. Josef Stalin recovered in Borjomi just like Lavrenti Beria, the head of the Soviet secret services.

The gate to Borjomi-Karagauli National Park

Borjomi is the starting point for visiting the Borjomi-Kharagauli National Park. The nature reserve covers an area of 65,000 hectares and stretches from 400 meters up to an altitude of 2,642 meters. The park is home to a wide variety of animals including brown bears, wolves, lynxes, deer, roe deer, chamois and golden eagles. Numerous hiking trails lead through the park, which is accessible from May to October. There are also guided one-day and multi-day hikes. The highest mountains in the park are the Sametshvario (2,642 meters) and the Shavimta (2,511 meters).

Sights in and around Borjomi

In Borjomi itself, the spa park, renovated in 2006, is one of the main attractions. The complex is home to various mineral water springs, which can be used as you wish. There are also sulphur baths, amusement stands and a cable car up to a viewpoint. The entrance fee to the park is 2 GEL, for the sulphur baths 5 GEL.

In the surroundings of Borjomi, there are several monasteries and churches worth seeing. Furthermore, the city of Akhaltsikhe is less than one hour of driving away.

Are you interested in a tailor-made private trip to Borjomi or to any other place in the Caucasus? Tell us about your wishes and immediately get an offer without obligation from us. 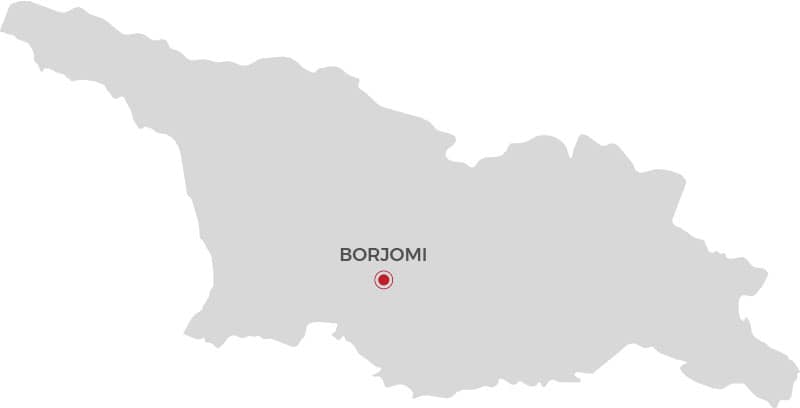 How to get to Borjomi

The 160 km from Tbilisi to Borjomi takes a bit more than 2 hours. From Kutaisi (130 km) the duration is approximately the same.

There are regular Marschrutka connections from Tbilisi. The minibusses depart from the Didube metro station. You pay 8 GEL for the 4-hour trip.

There is no airport in Borjomi. The nearest airports are those in Kutaisi and Tbilisi.

There is a train connection between Tbilisi and Borjomi. The journey takes about 4 hours.

Things to do in Borjomi