Adishi is a small mountain village in the region of Samegrelo and Upper Svaneti in Georgia. The original and authentic village is situated in the middle of the mountains of the Greater Caucasus – between Ushguli and Mestia, the capital of Svaneti.

A visit to Adishi, situated at 2,040 metres above sea level, is worthwhile in many respects – just because the village is far more untouched and less frequented by tourists than other Swaneti villages. But also because of the stone houses from the Middle Ages with their fortified towers that tower above the village. Adishi also has four churches with beautiful traditional frescoes.

In the small town of Adishi, there are four churches: These are the two St. George churches and the Archangel Church, which all date from the 12th century, as well as the Liberator Church, which was built in the 10th and 11th centuries. Adishi has a handful of simple guesthouses. The gentle tourism brings the villagers a welcome source of income. Nevertheless, several villagers have left their village in recent years, especially after the school was closed in 2002 and the children have had to go to school in Ipari, 11 km away.

Northeast of Adishi is the 4,290 metres high Mount Adishi with its 9 km long Adishi Glacier, whose tongue reaches down to 2,298 metres. The Adishishala River springs from the glacier and flows into the Enguri between Bogreshi and Nakipari, which in turn flows into the Black Sea at Anaklia.

Private tour to Adishi or Svaneti

Are you interested in a tailor-made private tour to Adishi, Svaneti region or whole Georgia? Tell us about your ideas and get our offer without obligation. 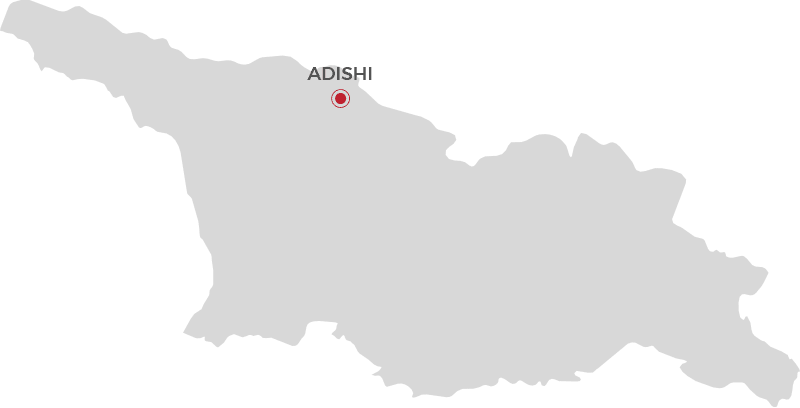 How to get to Adishi

From Tbilisi to Mestia (464 km, 7.5 hours) the road is good, from Mestia to Wikhnashi (35 km, 1h 15min) it is quite bumpy. The last stretch to Adishi is very difficult and only passable with an offroad vehicle.

The best way is to take a minibus to Mestia (there are many cities in Georgia from which those minibusses go to Mestia) and then hitchhike or take a 4x4 taxi to Adishi.

In Mestia there is a small airport called Queen Tamar Airport. The company VanillaSky offers flights from Kutaisi and Tbilisi (runway Natachtari) to Mestia. In case of (too) bad weather, the flights are canceled.

Adishi, like all Swaneti, cannot be reached by train. By train, you can only travel to Zugdidi. Then you can get to Adishi by minibus, taxi or hitchhike.

Things to do in Adishi