Why Georgian and Russian are not related

Most people in Georgia – the older ones anyway – understand Russian and speak the language quite well. No wonder: Georgia was part of the Soviet Union for 70 years. And its successor state, the Russian Federation, is now at least one of Georgia's most important neighbours.

For Georgians, however, Russian is a foreign language they have to learn at school. Geographical proximity to Russia is not an advantage: From a linguistic point of view, Russian is just as far removed from Georgian as Chinese, English or almost any other language in the world.

Neither Indo-European nor Turkic language

What is the Georgian language related to?

Georgian belongs to the South Caucasian language family, which is partly also called the Carthusian language family. In addition to Georgian, it also includes the languages Mingrel, Lasic, Swan and Judeo-Georgian, the language of Georgian Jews. With almost 5 million speakers, Georgian is the most widely spoken South Caucasian language. The other four languages have significantly fewer speakers:
+ Mingrel: approx. 500'000
+ Lasic: approx. 22,000 to 250,000
+ Judeo-Georgian: approx. 70'000
+ Swan: approx. 15'000 to 30'000

So it's clear: The only languages related to Georgian are Mingrel, Lasic, Judeo-Georgian and Swan. The Georgian language is therefore not related to any official language of a neighbouring country: Turkish and Azerbaijani are Turkic languages, Armenian and Russian are Indo-European languages.

The Caucasus – home of 40 languages

Even the other Caucasian languages are not related to Georgian. For example, Abhazian, Abasinian, Circassian, Kabardinian and Adygean belong to the Northwest Caucasian languages. And anyone who thinks "Wow, there are quite a few languages in the Caucasus" should be told that this was far from all. There is another language family in the comparatively small area of the Caucasus: that of the North-East Caucasian languages.
Among them are Chechen, Ingush, Andish, Awarish, Didoish, Lakish, Darginish, Lesgish, Tabassaran, Batsish and various other small languages. The three Caucasian language families comprise 40 languages spoken by a total of 9 million people. Of course there are also Georgian loan words from different languages, including Russian and English. However, this in no way indicates a relationship between the two languages. If you still don't believe that Georgian and Russian are not related, the following table will help you. To make you understand all the words, we transcribed them.


You see, there is no similarity between the individual words. The differences become even more visible when you compare the fonts. The Georgian alphabet - it is called Mchedruli - looks completely different from, for example, the Latin or the Cyrillic alphabet. I will go into this topic in more detail in one of my next blog articles.

Facts about the Georgian language 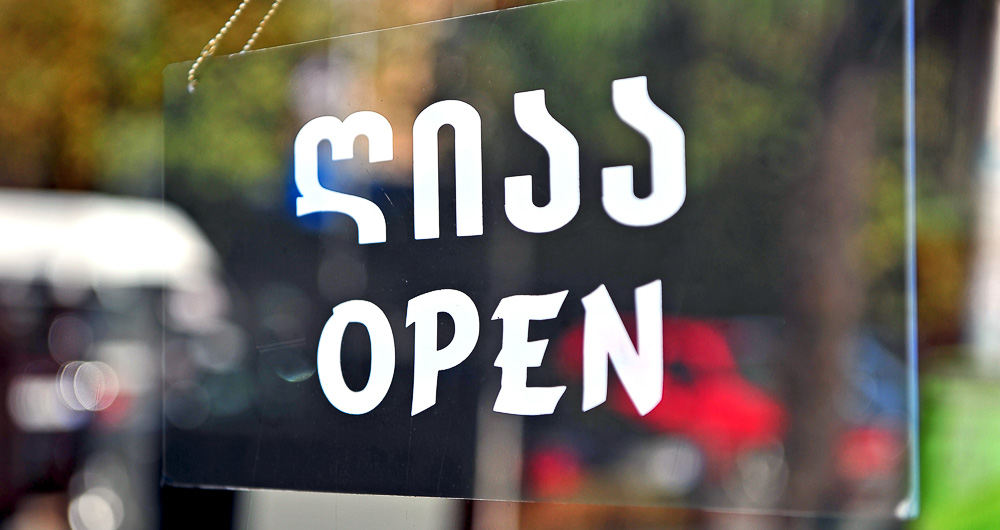