Recipe for the 3 sisters of Azeri dolma

One of the most popular and delicious dishes of Azerbaijan's cuisine is called Uch Badji, the 3 sisters of Dolma. Basically, you can stuff nearly every kind of vegetable, but mainly it is prepared with eggplants, peppers and tomatoes. This is why it is called the 3 sisters.

1. Mix the ground meat and the onions and brown it in a large pan with a small amount of butter.

2. While the meat is pan-frying, bring to boil a large pot of water with a pinch of salt.

3. Add the eggplant to the water and boil it until they're soft (around 5 min)

4. Slice the tops off of bell peppers and tomatoes and hollow them out (save the tomato's insides for later)

5. Pepper and salt the peppers' and tomatoes' insides and them set aside.

6. Rub the eggplants between your hands until they're soft.

7. Cut deep slits in the eggplants and remove most of the flesh.

8. Pepper and salt the eggplants' insides.

9. Add the insides of the tomatoes, the basil and the cinnamon to the meat and mix it.

10. Stuff all three vegetables with the meat mixture.

11. Spread the green beans out in the pan.

12. Place the stuffed vegetables on the beans and add enough water to cover the veggies' bottoms.

13. Heat it moderately for 20 minutes and serve the Dolma. 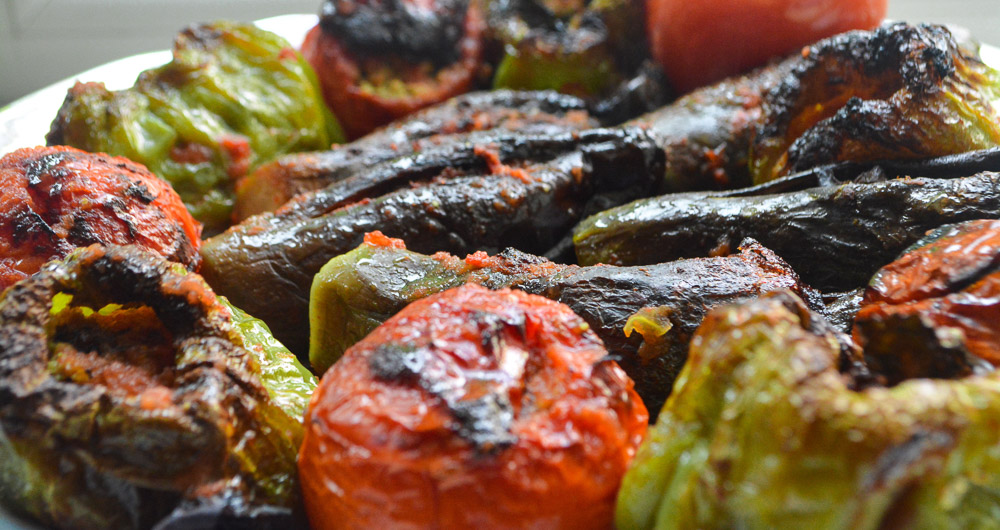