Currencies and money in the Caucasus

When the USSR was covering the whole Caucasus, there was just one currency in the whole region: the Soviet ruble. After the collapse of the Soviet Union new countries were born and with that new currencies, too. In this blog article you learn more about the Caucasian currencies.

The Caucasus consists of a southern and a northern part. Armenia, Azerbaijan and Georgia are situated in the South Caucasus. And in the North Caucasus there are the Russian republics Dagestan, Ingushetia, Kabardino-Balkaria, Karachai-Cherkessiea, North Ossetia-Alania and Chechnya as well as the Stavropol region.

After the USSR's breakup there were some efforts to establish a homogeneous currency within the Commonwealth of Independent States (CIS), but the project didn't have any chance. So Azerbaijan and Russia (both in 1992), Armenia in 1993 and Georgia in 1995 established their own currencies dram, manat and lari.

Armenia was one of the last post-sovietic countries establishing an own currency. This happened in November 1993 – more than two years after the country's independance. The Armenians were allowed to exchange their rubles with the new Armenian dram. For 1 ruble they recieved 200 drams.

In English, the word «dram» means simply «money». Etymologically it is related to the former Greek currency «drachma» and to the «dirham», the currency of the United Arab Emirates and Morocco. During the starting time, a dram was splitted in 100 luma, but those coins didn't last for a long time. Today the smallest entity is the 10 dram coin.

The Armenian dram is not only an official currency in Armenia, but also in the controversial Republic of Nagorno Karabakh. According to the United Nations and the Council of Europe, Nagorno Karabakh remains part of Azerbaijan. Both countries, however, claim the territory. In addition to the Armenian dram, in Nagorno-Karabakh one can also pay with the Nagorno-Karabakh dram, which, however, is far less widespread. 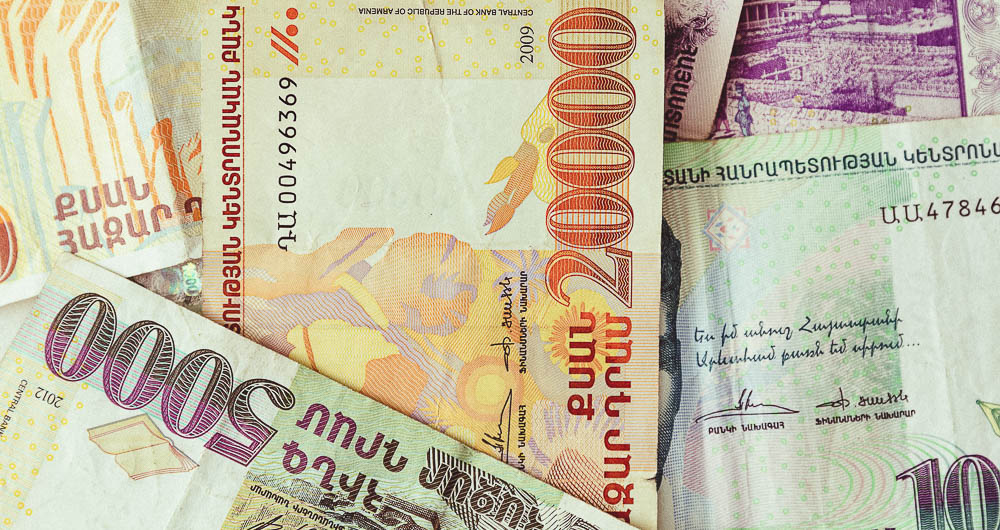 There are ATMs in Yerevan and all other medium-sized and larger towns. The counters are open from Monday to Friday from 9 a.m. to 3 p.m. In addition, there are exchange offices (also in smaller towns) which are open until midnight and also on weekends.

The usual credit cards are generally accepted in the larger cities. Traveller cheques are not widespread. In order to avoid unfavourable exchange rates, one should use Traveller Cheques in US dollars.

In restaurants you should give a tip of 10%.

The Manat increasingly lost value due to high inflation after the turn of the millennium. And so it was replaced by a new Manat on 1 January 2006. For 5,000 old Manat (AZM), one got 1 new Manat (AZN).

The current currency is sometimes referred to as the third manat because the manat was already the currency of the Democratic Republic of Azerbaijan (1918 to 1920). 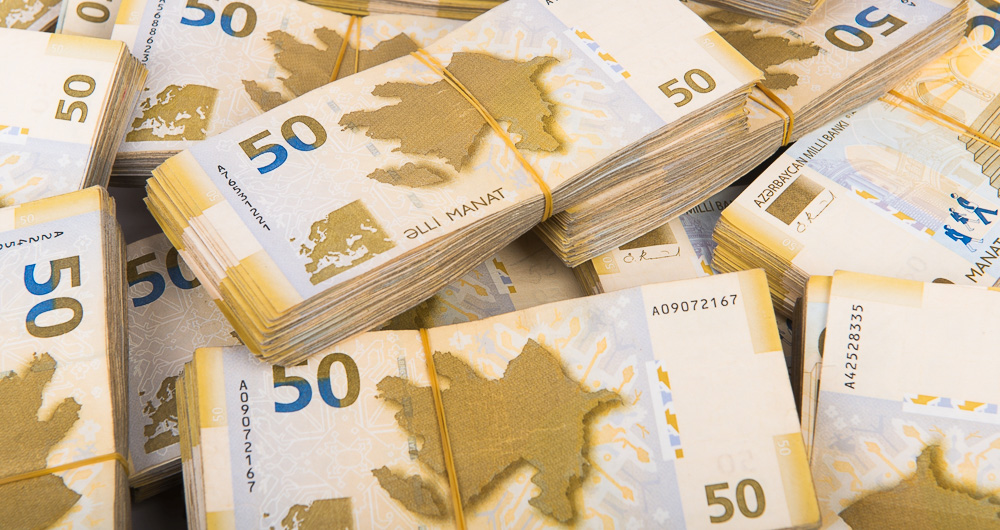 There are ATMs in Baku and several other medium-sized and larger cities. The bank counters are open from Monday to Friday from 9:30 a.m. to 5:30 p.m. In addition, there is the possibility to exchange money at the airport, in banks and in many hotels. US dollars, pounds sterling and euros are the preferred currencies.

Credit cards are only accepted in the big cities. You won't get far with traveller cheques. In Azerbaijan, it is advisable to always carry enough cash with you.

In restaurants, tips often are already included in the invoice amount. If not, you should give about 10%.

Georgia replaced the Soviet Rouble on April 5, 1993. But two and a half years were to pass before a new currency of its own was introduced. In a first step, the currency was called a «coupon», a kind of emergency currency. This was affected by hyperinflation: One US dollar cost 1,000 coupons in the beginning and 2 million coupons two years later. Quite bizarre: The notes were available in the denominations 1, 3, 3,000, 30,000, 150,000 and 1,000,000.

The nineties in Georgia were economically hard-core. People had no jobs, electricity and running water were a problem even in the big cities, and anarchy sometimes ruled the streets. At the end of 1995, the Lari was finally introduced in Georgia. It would take years for the country's economy to recover. But the Georgian Lari was surprisingly stable.

Important personalities from Georgian history are depicted on the Georgian banknotes: They show the painter Niko Pirosmani (1 Lari), the composer Sajari Paliashvili (2 Lari), the scientist Iwane Jawakhishvili (5 Lari), the poet and politician Akaki Tsereteli (10 Lari) and the poet and journalist Ilia Chavchavadze (20 Lari). Queen Tamar, who was in power during the golden age of Georgia between 1184 and 1213, is also depicted on the 50 Lari note.

Davit Aghmashenebeli, also known as David the Builder, is also present. The image of the former king of medieval Georgia, who liberated the country from the Seljuk Turks, adorns the 500 Lari note. The 100 Lari note depicts the famous writer Shota Rustaveli and the 200 note shows the officer and national hero Kakuza Tsholoqashvili. 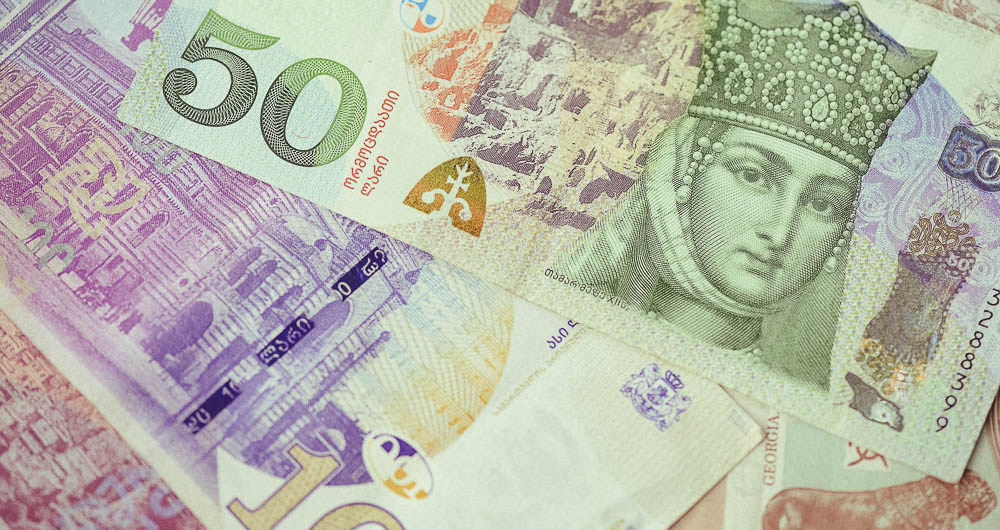 In Tbilisi, but also in all other medium-sized and larger cities, there are ATMs where cash can be withdrawn with MasterCard, Visa, Maestro or Cirrus. The bank counters are open from Monday to Friday from 10:00am to 6:00pm. In addition, there are exchange offices (also in smaller towns), which are also open on weekends and sometimes until late into the night.

The usual credit cards are generally accepted in the larger cities. Traveller cheques are not widespread. To avoid unfavourable exchange rates, Traveller Cheques should be denominated in US Dollar or Euro.

The locals usually give no or very little tip in the restaurants. As a tourist, it is advisable to simply round up to the next amount.

Money in the North Caucasus

As in the whole Russian Federation, the Russian ruble is the currency in the North Caucasian republics Dagestan, Ingushetia, Kabardino-Balkaria, Karachai-Cherkessiea, North Ossetia-Alania, Chechnya and Stavropol region, too. Furthermore the De-facto regimes of Abkhasia and South Ossetia, which officially belong to Georgia, established the Russian ruble as their currency.