5 restaurants to visit in Tbilisi

Like the whole city, the gastronomic scene is booming in Tbilisi: every year there are more and more restaurants in the Georgian capital. It's not easy to keep track of this jungle of culinary delights.

International cuisine has also made its way into Tbilisi in the meantime. You can eat Italian, Indian, Chinese, French and Japanese. But for an international city, there still is an enormous number of restaurants offering Georgian cuisine – be it in a traditional or modern way. We'll introduce you to 5 restaurants that you shouldn't miss out on when visiting Tbilisi.

The Shavi Lomi Restaurant was opened in 2011 and is located at 28 Zurab Kvlividze Street, a 15-minute walk from Marjanishvili metro station. It is 7 minutes from Fabrika and 5 minutes from Chitaia Square. 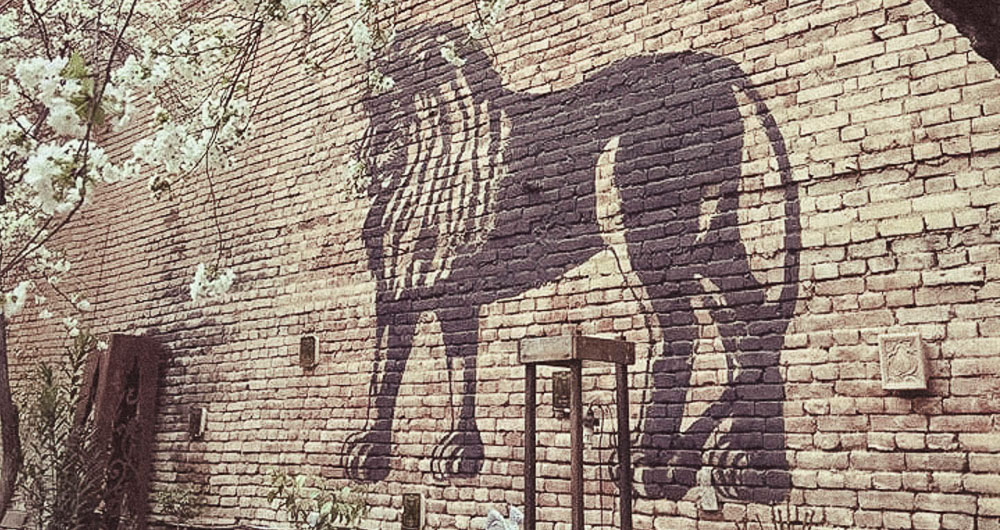 The entrance to Shavi Lomi is an unspectacular metal door in a painted façade, through which you enter the cosy outdoor area of the restaurant. In the garden with the beautiful wooden floor and the many plants, you immediately feel at home. The interior also is worth seeing and reminds of a mix of vintage, flea market and art gallery. 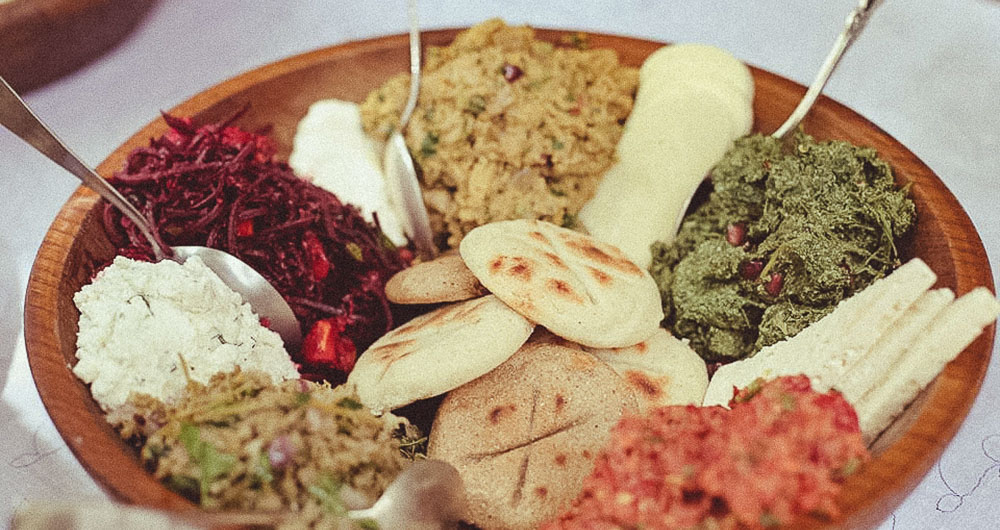 In English, Shavi Lomi means «Black Lion» – following the famous painting of the same name by the Georgian painter Niko Pirosmani (1862 to 1918). Of course, a large black lion also adorns the beautiful brick wall in the garden.

Shavi Lomi offers traditional dishes of Georgian cuisine and newly interpreted dishes. It is best to try both! Since there are only about 10 tables and the restaurant is popular with locals and guests, it is worth reserving in advance. 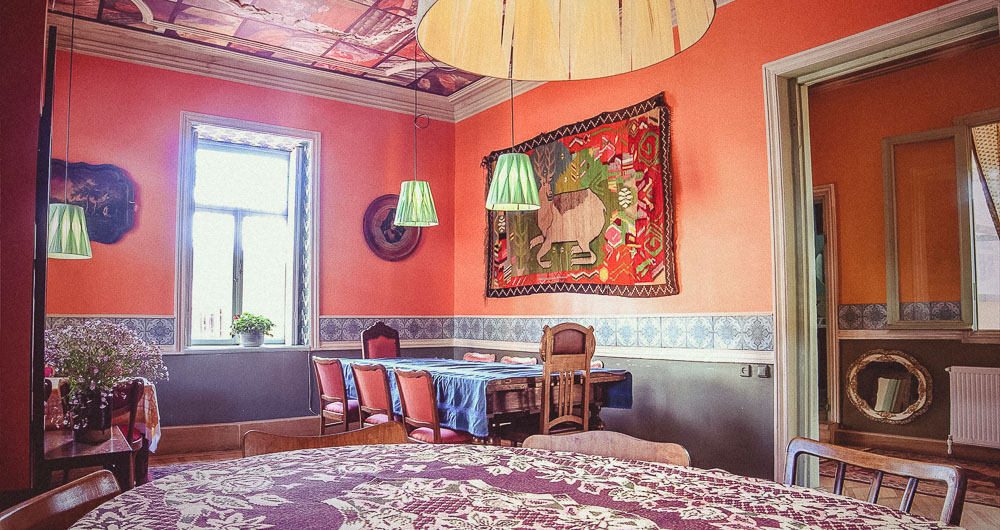 By the way: In Georgia, there is also a beer called Shavi Lomi. However, this has nothing to do with the restaurant.

The Barbarestan Restaurant is located at 132 Davit Aghmashenebeli Avenue in the centre of Tbilisi – right in the middle between Saarbrücken Square and the Boris Paichadze National Stadium. Barbarestan can be reached on foot in 5 to 6 minutes from the metro station Marjanishvili.

From the outside, the restaurant looks rather inconspicuous. As it is located directly at the sidewalk, there are only 2 to 3 small tables outside. The interior is beautifully decorated. In the basement, there is an old cellar vault with beautiful walls made of natural stone. 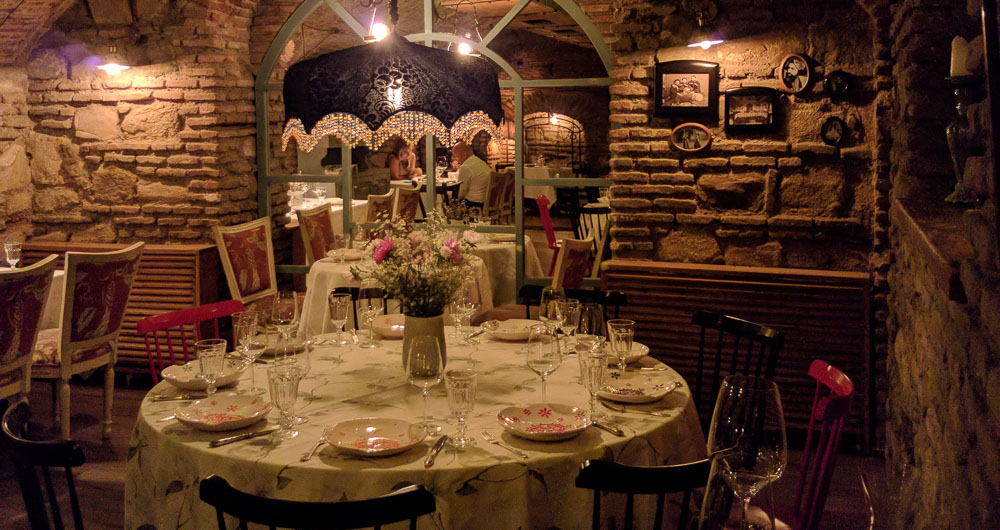 In Barbarestan, you will find some very good Georgian wines. And the kitchen is not inferior to these. It is special that all dishes are based on a more than 100 years old cookbook of Barbare Jorjadze (hence the name Barbarestan). These dishes are rarely found in Georgia in this form. The service is very professional and courteous; the waiters are competent and can tell you many interesting things about Georgian cuisine and culinary delights. 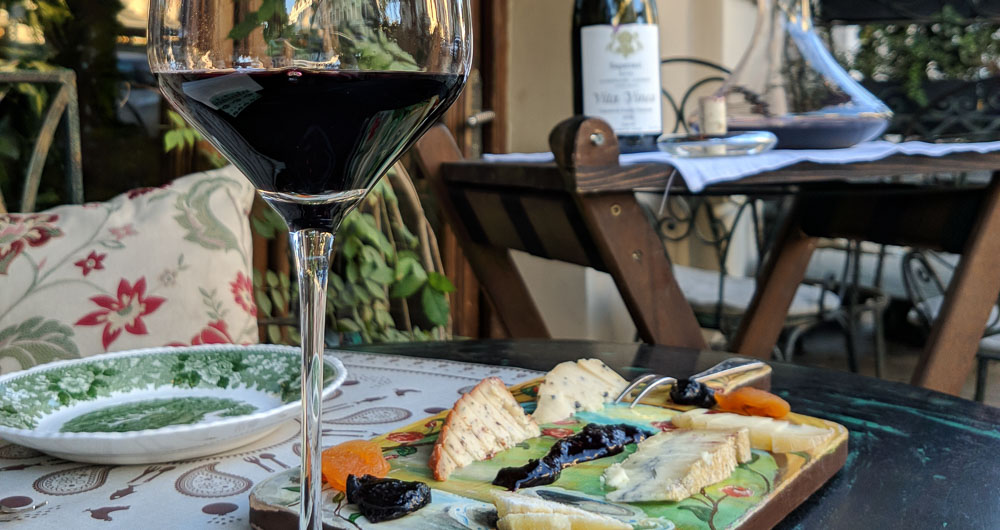 Barbarestan is one of the more expensive restaurants in Tbilisi. But the visit is worthwhile in any case. We recommend reserving a table in advance.

The Meama Restaurant reopened in 2018 and hit Tbilisi like a bomb. The fancy restaurant is located in the historic old town, above «Moedani Square, at Dzmebi Zdanevichebi Street 8. The old, but renovated and beautifully refurbished building with its blue wooden balconies fascinates and exudes a great charm. 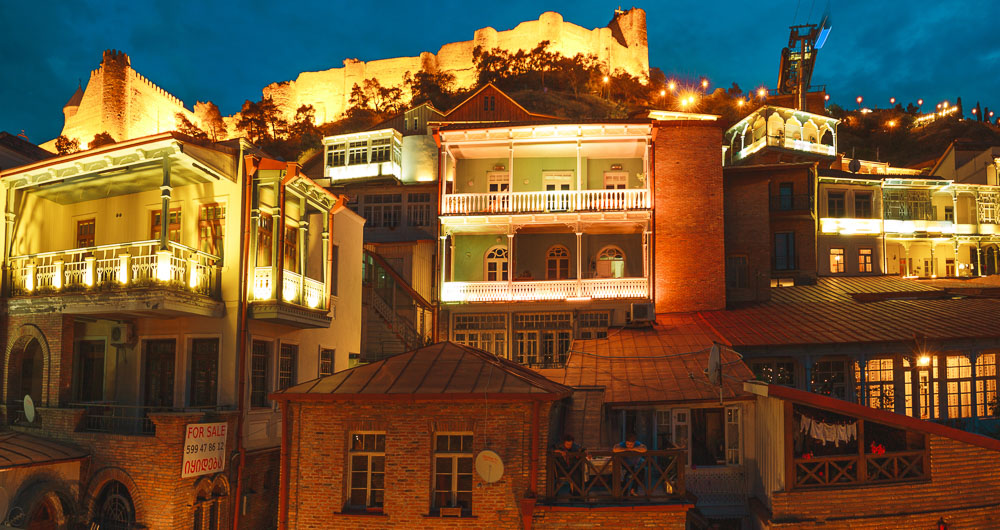 The renowned chef Levan Kobiashvili relies on traditional Georgian cuisine, which he reinterprets. Old and almost forgotten recipes of Georgian cuisine are revived, slightly modified or combined with influences from other cuisines in the world. The result is interesting creations, all lovingly arranged. The service in the Meama Restaurant also leaves nothing to be desired and is very professional. As a guest, you always feel very comfortable. 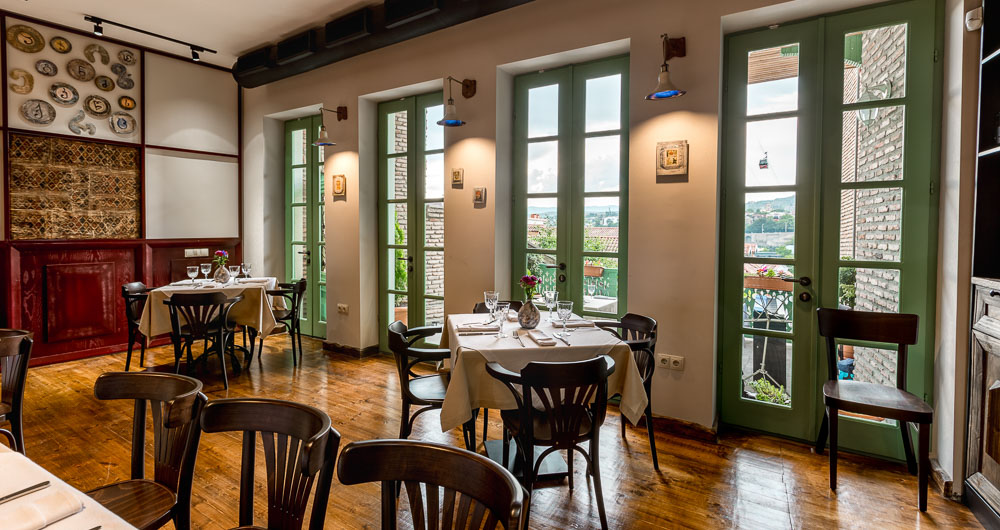 If you dare, try a glass of 75% Chacha spirit. Nothing for weak nerves, but surprisingly fine and well digestible. 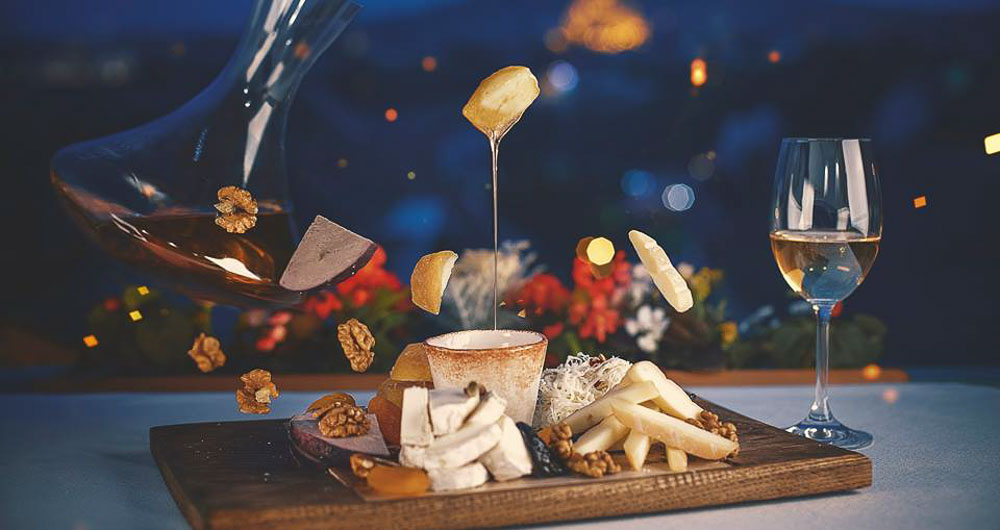 The Salobie Bia Restaurant is dedicated to the culinary delights of Western Georgian cuisine, which is hotter and spicier than East Georgian cuisine. Typical dishes from the West are the cornbread «Mchadi», the cheeses «Sulguni» from Samegrelo and «Imeruli» from Imereti or the sausage «Kupati». 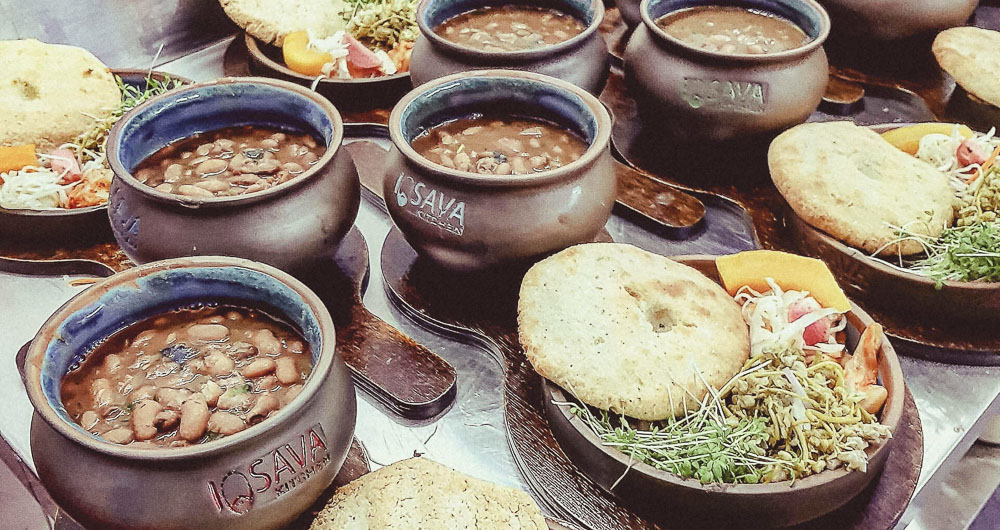 At Salobie Bia, special attention is paid to the «Lobio» dish, a spicy bean stew with onions, coriander, chilli and garlic, served in a clay potty and accompanied by «Mchadi» cornbread. The choice and quality of the wines are easily matched by the delicious food. 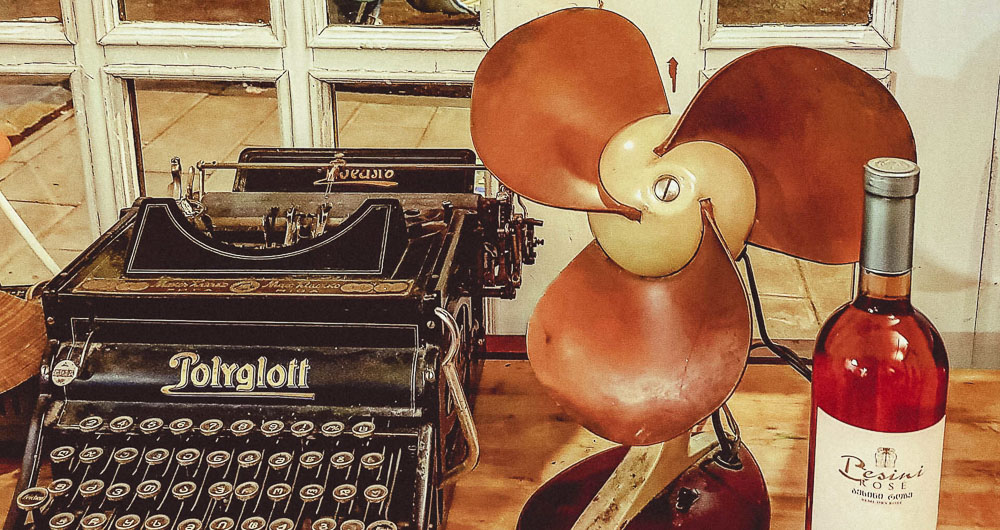 The small restaurant is also exciting because of its creative furnishings. Among other things, numerous pictures of modern Georgian artists decorate the walls, some of which can be bought. 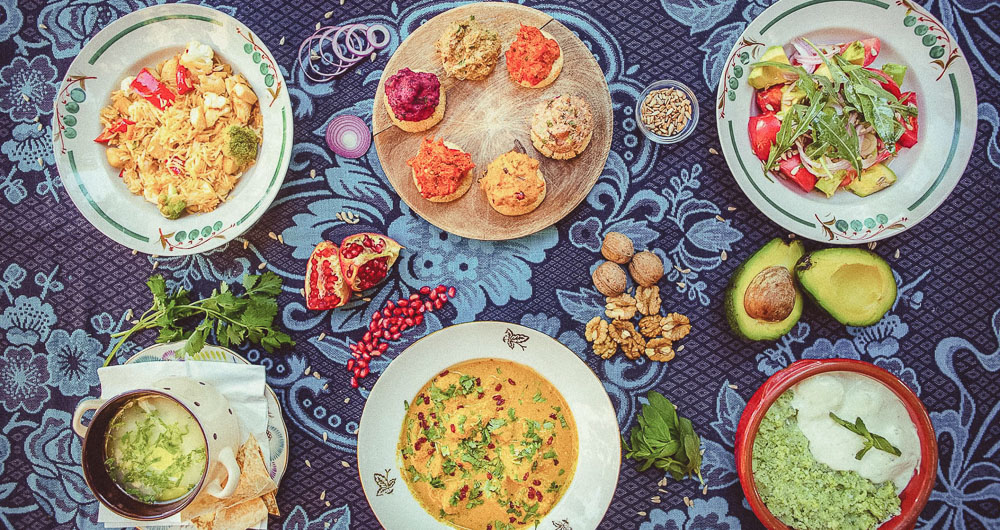 Coming from Salobie Bia Restaurant, Sakhli #11 is just around the corner – at 11 Galaktion Tabidze Street, just a 4-minute walk from Freedom Square. «Sakhli» means «house», which explains the name of the restaurant. In addition to the indoor area, there also are some roofed tables outside. 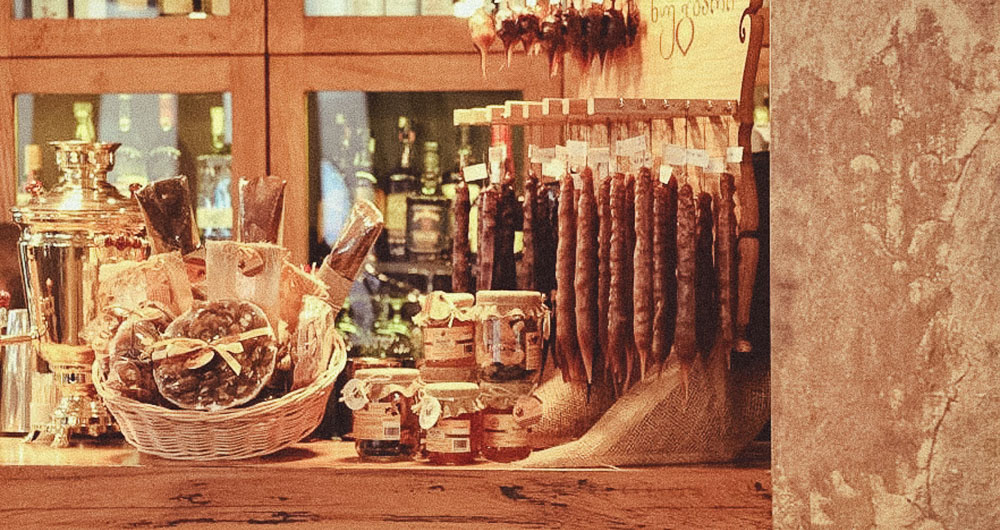 Sakhli #11 serves an extensive selection of Georgian specialities. Of course, this also includes organic and natural wines. Be sure to try: «Chicken Chkmeruli», a Georgian speciality made from chicken in a garlic sauce, which is prepared especially delicious in Sakhli #11. 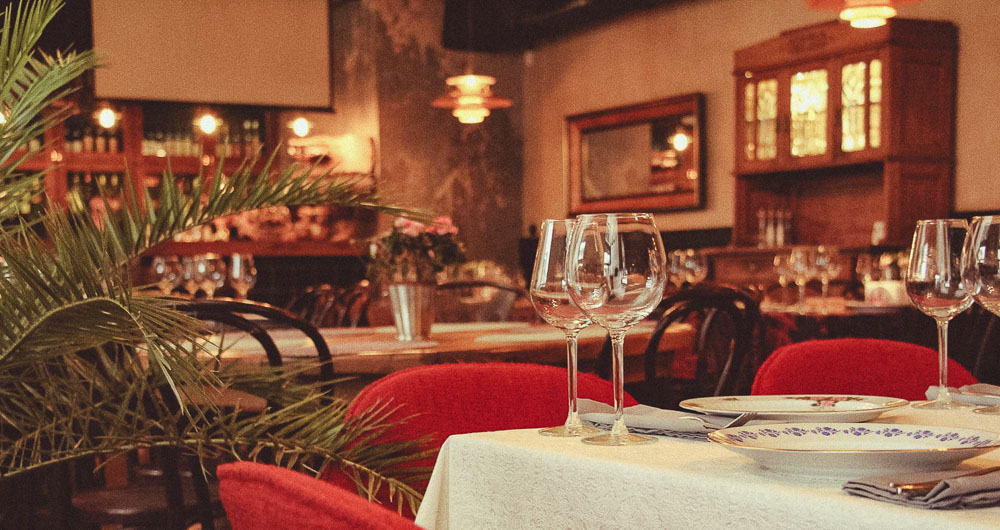