10 castles in Georgia you must have seen

The landscape of Georgia is characterized by hills and mountains, the history of the country full of conquests and wars. No wonder in Georgia there are numerous castles and fortresses.

MyCaucasus Travel introduces you to the 10 most beautiful castles, palaces and fortresses in Georgia.

The Gori Fortress is enthroned on a hill above Gori and is the city's most important landmark, along with the Stalin Museum.

A fortress must have stood on this site even before the beginning of the modern era. Today's fortress, however, was built later. It was first mentioned in the 13th century. In the 16th and 17th century the fortress Gori was the scene of various conflicts between the Ottomans and the Persians. The Gori castle received its present appearance in 1774: Erekle II, the then King of Cartlia-Kakheti, had it thoroughly renovated. 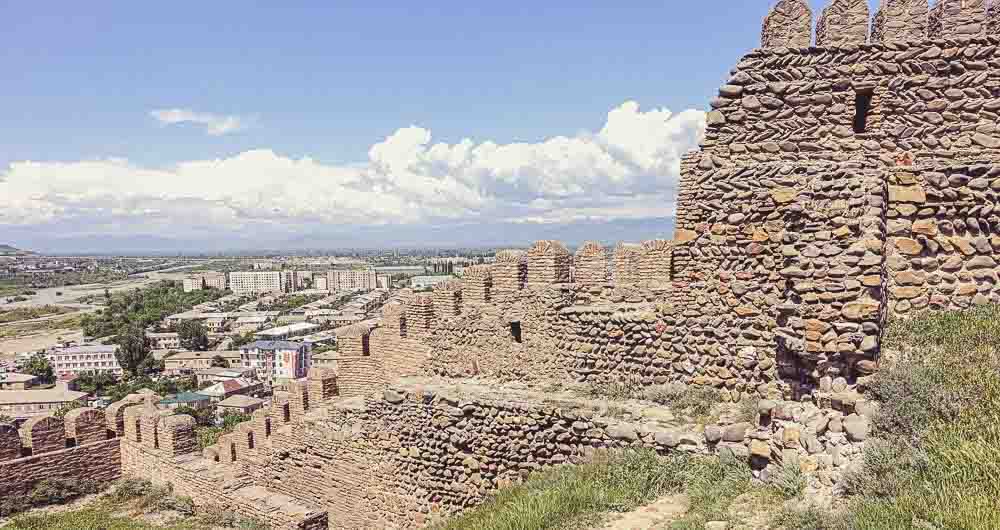 If you drive from Tbilisi to Western Georgia, you can see the fortress of Surami from far away. It stands on a hill on the northern edge of the city and looks majestic. Archaeologists estimate that most of the castle must have been built in the 11th century. Various elements, however, are probably much older.

On the way to Kutaisi, Svaneti or the Black Sea it is worth a short stop in Surami. You will also find the ideal food in Surami: Everywhere at the roadsides, the locals sell their specialty Nazuki, a sweet bread filled with raisins. 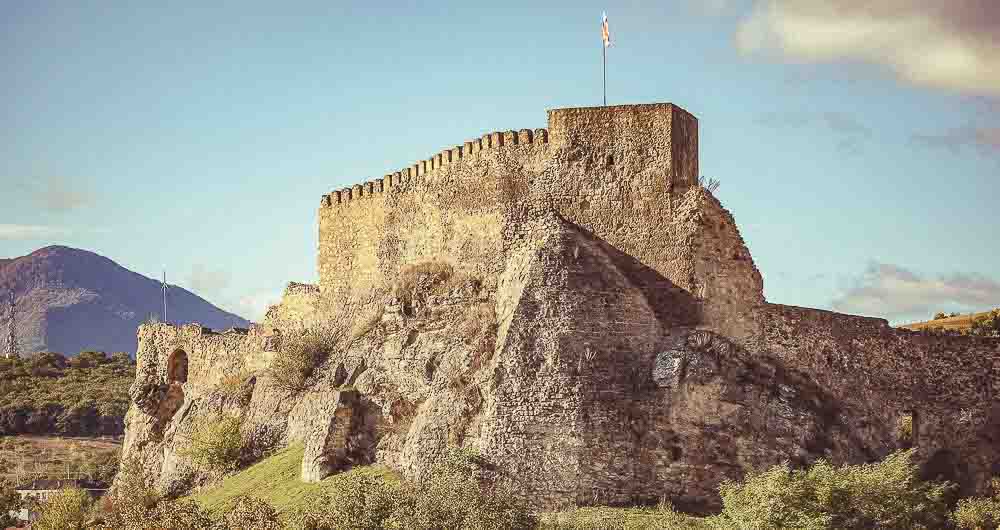 The fortress of Petra stands in a particularly beautiful location, right above the Black Sea coast, on a cliff high above the waves. The fortress gets its name from this rock (petra = stone in Greek). If you drive to Batumi, you should visit this unique place on the way. It is possible to visit the fortress from Tuesday to Friday, from 10:00 to 19:00. 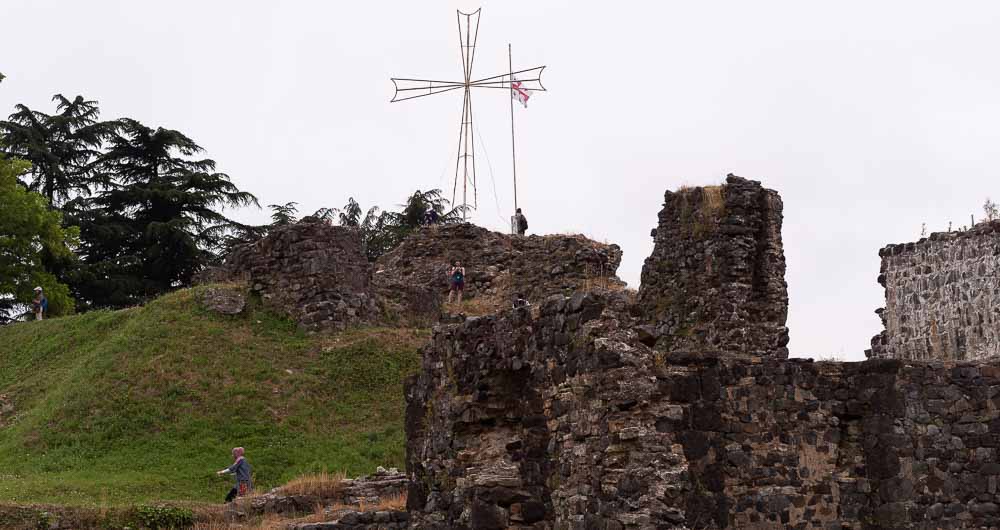 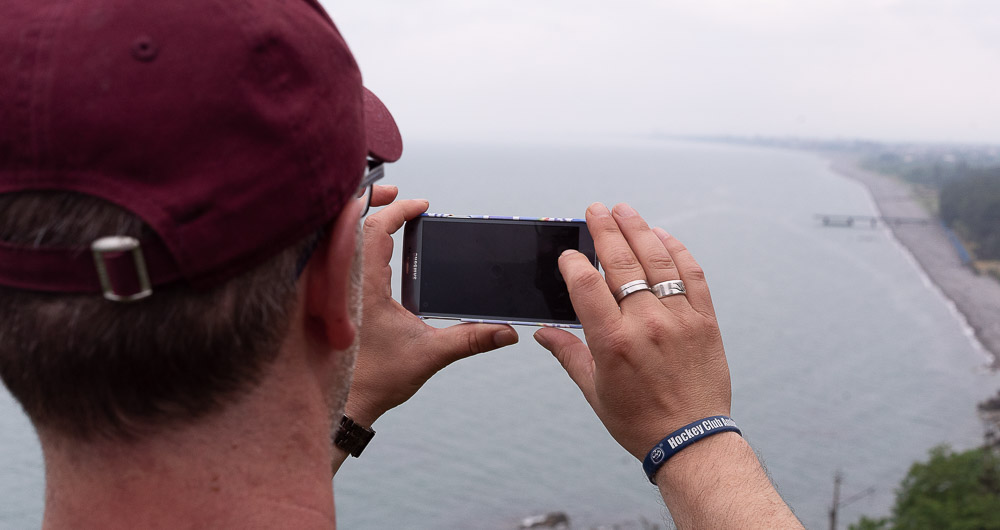 The Azeula Fortress, also called Kojori Fortress, is one of the most spectacular excursion destinations in the immediate vicinity of Tbilisi. The fortress stands on a pointed rock, from where you can enjoy a 365-degree panoramic view. The oldest parts of the Azeula Fortress date back to the 11th century.

The Nariqala Fortress is the oldest part of Tbilisi. The castle was built by the Persians at the end of the 3rd century and is, therefore, older than the underlying old town of the Georgian capital.

The name of the castle comes from the Persian and means «impregnable castle». But it was conquered in the course of history: by the Arabs between the 7th and 10th centuries, by the Mongols in the 13th century, by the Turks in the 16th century and by the Persians in the 17th century.

A footpath leads directly from the old town to the castle. You can also take a cable car from Rike Park on the other side of the Mtkvari River to Nariqala Fortress. 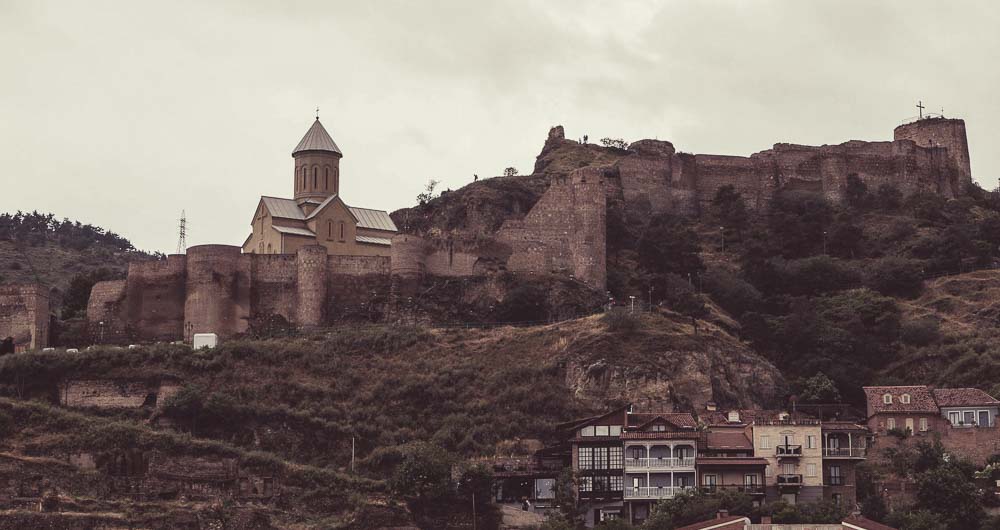 At the confluence of the Paravani and Mtkvari rivers in Samtskhe-Javakheti in southwest Georgia, the fortress of Khertvisi stands on a high rock. Since 2007, the Khertvisi Fortress, together with the cave monastery of Vardzia, which is almost 15 km away, has been on the tentative list of UNESCO World Heritage Sites. 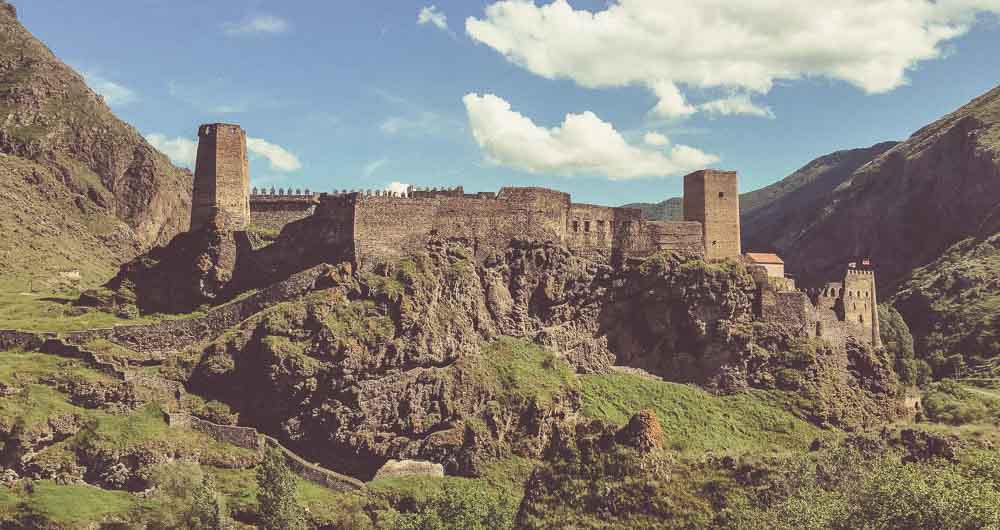 The Ksani Fortress, also known as the Mtkvari Fortress, is situated on a hill about 10 km west of the old Georgian capital Mtskheta, with the rivers Ksani and Mtkvari flowing together nearby. The Ksani Fortress was built in 1512 by King Bagrat I. About 200 years later it was reconstructed by the Prince of Mukhrani. 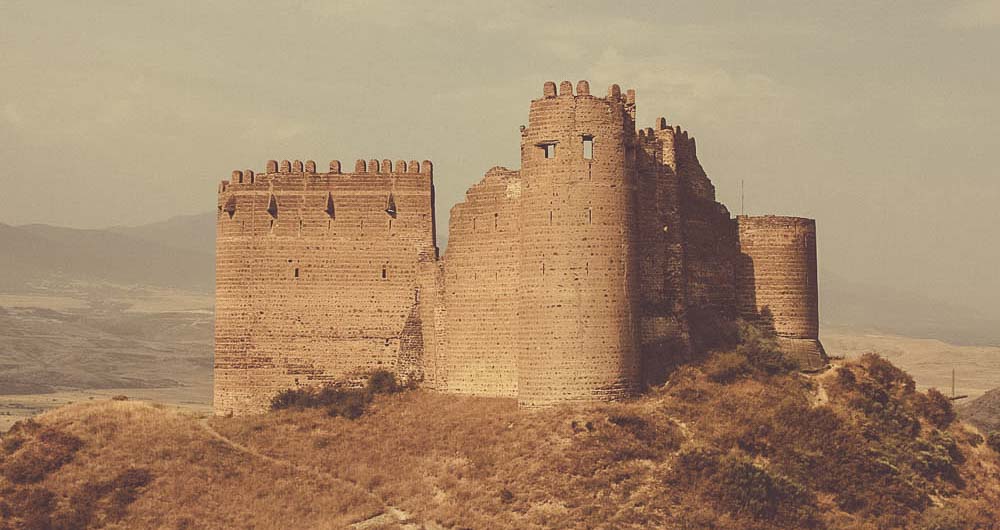 Those who travel to Kakheti will hardly be able to pass this fortress: the 16th century Gremi Fortress stands on a hill between Napareuli and Kvareli and is visible from afar. Directly behind the fortress are the first foothills of the Greater Caucasus.

Before Telavi became the capital of Kakheti in the 17th century, this was Gremi for one and a half centuries. It was an important trading town on the Silk Road until it was destroyed by the Shah Abbas I of Persia. However, the fortress still exists today – and with it the archangel church, the bell tower and the winery, which are all located in the fortress complex. 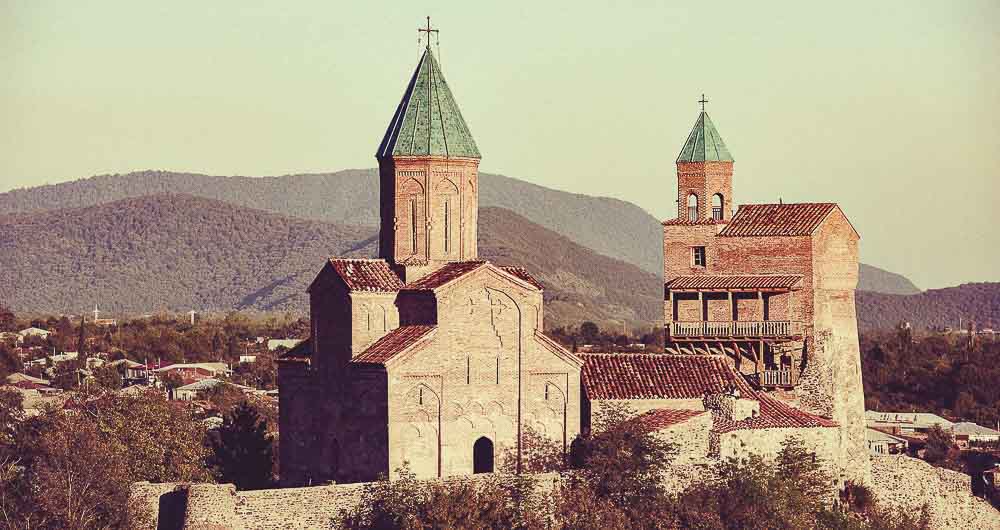 The Manavi fortress stands on a hill above the village of the same name in the Sagarejo region of Kakheti. The castle was probably built as early as the 10th or 11th century, but there is no clear evidence of this. What is certain is that the Kakhetian King Davit II had a palace built from the ruins of the fortress in the early 18th century. His brother, Teimuraz II, married his wife Tamar there. After that, they lived in the castle of Manavi.

The Manavi Fortress is not very high, but the 365-degree view from there is still fantastic. From the village of Manavi you need about an hour on foot. Alternatively, you can drive by car (4X4) almost to the fortress. Tip: This fortress is an excellent place for a barbecue or picnic.

By the way: The Manavi Fortress is said to have been connected to the Chailuri Fortress (see below) by a tunnel system. The two forts are about 8 km apart. 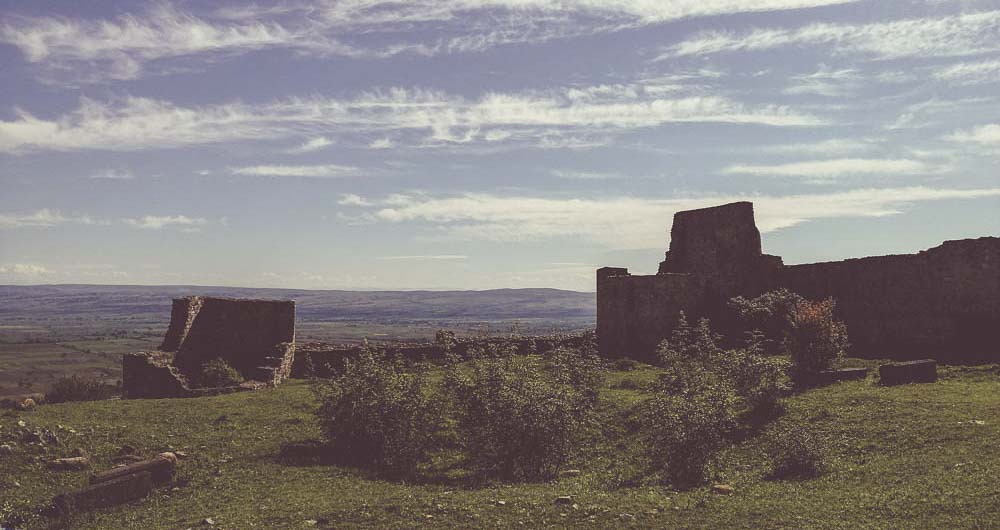 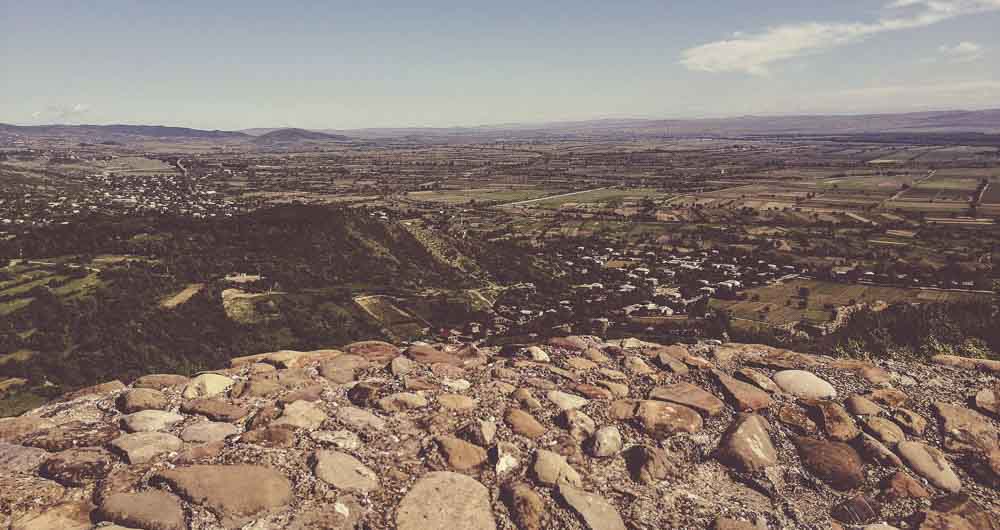 The Chailuri Fortress, also known as Niakhura, is located near Sagarejo in Kakheti and very close to the Manavi Fortress. These two castles can be visited together.

Chailuri was probably built in the 16th century. Together with the Manavi Fortress it served to control who could and could not get to Tbilisi. 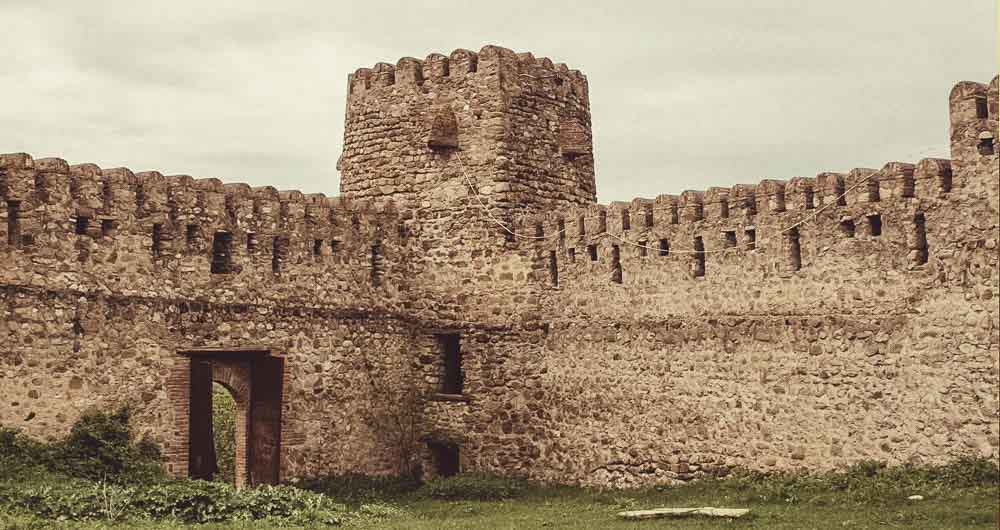