Nakhchivan is a semi-desert region that is separated from the main portion of Azerbaijan by Armenia. Nakhchivan is extremely arid and mountainous. The Zangezur Mountains make up its border with Armenia while the Aras River defines its border with Iran. The only area of forest is located near Bichanak. The flora consists of the mountainous steppe, with dwarf oak and Iberian maple in the upper valleys. Sparse vegetation and intense bursts of rain often cause floods. The region regularly has strong earthquakes; that of 1931 has been particularly severe.

Armenian tradition holds that Nakhichivan was founded by Noah, of the Abrahamic religions. The oldest culture artifacts found in the region date back to the Neolithic Age (6000 B.C.E. to 4000 B.C.E.) The region was part of the Mannaean civilization, an ancient people of unknown origin, who lived in the territory of present-day Iran, around the tenth to seventh centuries B.C.E. It became part of Urartu, an ancient kingdom of Armenia that existed from around 860 B.C.E. until 585 B.C.E. The name corresponds to the Biblical Mount Ararat.

In the sixteenth century, control of Nakhchivan passed to the Persian Safavid dynasty. In 1604, Shah Abbas I Safavi, concerned that the lands of Nakhchivan and the surrounding areas would pass into Ottoman hands, instituted a scorched earth policy.

After the last Russo-Persian War (1826-1828) and the Treaty of Turkmanchai, the Nakhichevan khanate passed into Russian possession in 1828. The Tsarist authorities encouraged the resettlement of Armenians to Nakhichevan and other areas of the Caucasus from the Persian and Ottoman Empires.

Nakhchivan was one of the first districts to declare independence from the USSR in 1990 but due to the Armenia-Azerbaijan War that ravaged the land, the republic got cut off with Armenia controlling Kraki exclave, leaving Nakhchivan isolated from Azerbaijan mainland.

Are you interested in travelling to Nakhchivan or to any other place in Azerbaijan? Tell us about your wishes and get an offer without obligation. 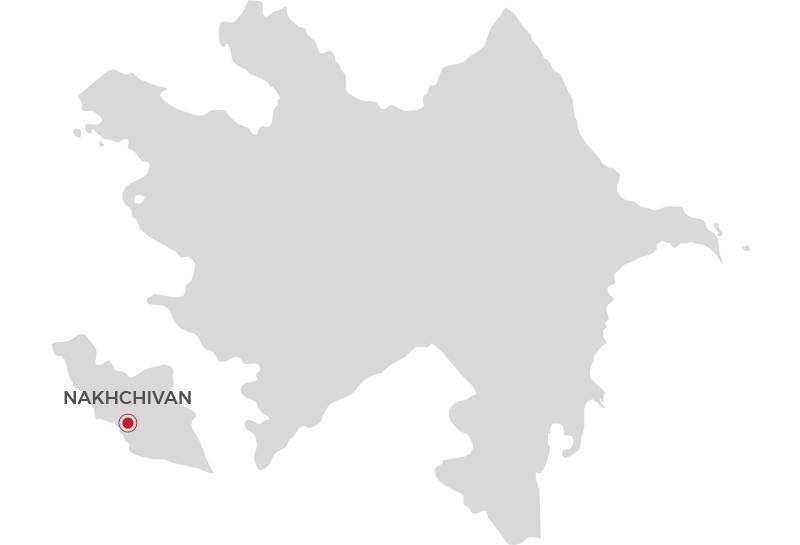 How to get to Nakhchivan

By car from Baku journey takes around 9 h distance (714 km).

There is bus from Baku to Nakhichevan, a duration of 8 h. The bus goes from Baku international bus terminal twice daily, here you can find schedule avtovagzal.az

There are no train connections to Nakhichevan.

Things to do in Nakhchivan

The Mausoleum of Momine-Khatun is one of the most monumental buildings of Azerbaijan architecture and is distinguished by an imperial grandeur. Read more ...