Bathing in oil since the 12th century

Naftalan is a small town in western Azerbaijan. It is located almost 50km southeast of the city of Ganja. Naftalan and its surroundings are known for their large oil deposits. This can also be recognized by the name.

«Naphta» comes from Greek and means «oil», «alan» comes from the Azerbaijani word «take». Oil deposits are nothing unusual in Azerbaijan, which is rich in raw materials. But the fact that the people of Naftalan have been bathing in oil since the 12th century and still do, is rather surprising.

Where people bathe in oil

It's no joke: In Naftalan you don't bathe in thermal water but in oil. There are several such baths in the town, as well as a healing center. The guests expect the medical effect of the oil to cure skin diseases, back pain, arthritis, psoriasis and dozens of other health problems. Naftalan oil - it is not flammable - is also said to have a disinfecting, antibiotic and metabolically stimulating effect.

However, there are also researchers who warn of an increased risk of cancer due to certain ingredients.

Oil tourism since the 12th century

This is of little concern to the fans of the oil baths. Since the 12th century, people have come to Naftalan because they expect the oil to cure them. Naftalan was a tourist destination before this term even existed. The people came from the neighboring countries Turkey, Russia and Persia, but also from Afghanistan and Europe. Even Marco Polo wrote about the baths.

Are you interested in a private tour to Naftalan or to any other place in Azerbaijan? Tell us about your ideas and immediately get an offer without obligation. 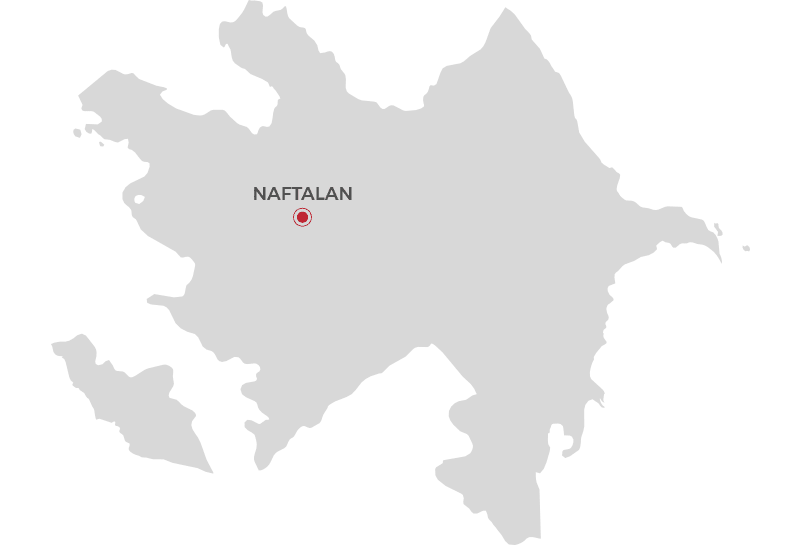 How to get to Naftalan

Naftalan is situated in the mid-west of Azerbaijan. From Ganja the journey to Naftalan takes 1 hour, from Baku 4 hours.

From Ganja which is located 50 km west of Naftalan, there are regular marshrutka connections.

From the Ganja International Airport, you can reach Naftalan within 1h 15min.

From Baku, there are train connections to Mingecevir and Ganja. From there you can take a taxi or a minibus to Naftalan.

Things to do in Naftalan