The Monastery of Geghard, with its remarkable rock-cut churches and tombs, is an exceptionally well preserved and complete example of medieval Armenian monastic architecture and decorative art, with many innovatory features that had a profound influence on subsequent developments in the region.

The history of Geghard dates back more than 1,500 years. Gegard, being a unique cultural monument, is a world heritage of human culture.

According to a legend, the monastery was founded in the first decades after the adoption of Christianity as a state religion in 301 by Gregory the Illuminator. However, originally the monastery was a small cave chapel. According to a legend, during the pre-Christian times, there was a sacred spring which is why the place was chosen for the construction of the chapel. Hence the original name of the monastery once was Ayrivank, which in Armenian means «cave monastery». Over the years the complex grew, the number of monasteries increased. In 1215 the main and most prominent monastery Katoghike was built.

Interesting legends and traditions are connected with the monastery. For example, there is a belief that Geghard helps your dreams come true. On the outer walls of the monastery, you can see curious grooves full of pebbles. There is a beautiful belief that if you make a wish, throw a pebble-stone from below and get into a groove, your dream will certainly come true.

Another unique fact that distinguishes the monastery from others is the holy spring that flows right inside the church. People throw coins here, making wishes. The water in the spring is considered holy. People make ablutions, and also fill the bottles with holy water and take with them.

Geghard is primarily famous for its architecture. This «architectural miracle» is literally carved in the depths of rock. On the walls of the ancient temple, you can see remarkable bas-reliefs and unique khachkars, which are carved in memory of the deceased. The symbol of the princely family Proshyan – a lion conquering a bull, is engraved on the walls of the monastery. Inside the temple. there is a spiritual, solemn atmosphere. Thanks to acoustics, during church singing, the monastery is filled with divine, angelic music. Inside the church. there is also the family tomb of Proshyan princes.

The Geghard Monastery was one of the spiritual and cultural centers of medieval Armenia, where besides religious buildings there were also such institutions as schools, libraries, printing houses. The monks lived in cell-caves carved next to the monastery. Monks made a great contribution to the development of calligraphy art. The school at the monastery had a repository of manuscripts.

Are you interested in a private tour to the Geghard Monastery or to any other place in Armenia and in the Caucasus? Tell us about your ideas and immediately get an offer without obligation from us. 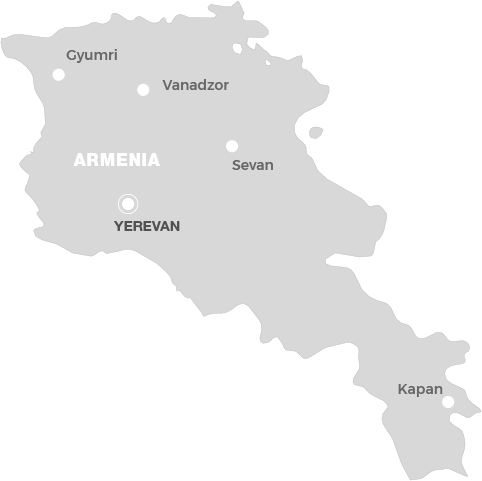 From The Yerevan International Airport, you can go to the Gai Bus Station and take one of the many busses or marshrutkas.

The Kotayak Province, where the Geghard Monastery is located, is not connected to the Armenian railway system.