Armenia's cultural city with the red and black houses

Gyumri, located in the northwest of Armenia, is the second-largest city in the country after Yerevan and is therefore rich in history, culture, art and traditions. The inhabitants of Gyumri are also known for their humor.

The city of Gyumri is situated on the banks of the Achuryan river in the Shirak valley. The highest mountain of Armenia, the Aragats, is only about 30 km southeast of Gyumri.

Gyumri has been inhabited for almost 5'000 years

People had already lived in the territory of the present city of Gyumri in the 3rd millennium BC. In the 8th century BC, the city was first mentioned as Kumaryi. Later the city was the first part of the Achaemenid Empire and then under the rule of the Orontids. In 331 BC Kumaryi (Gyumri) was incorporated into the Armenian Kingdom.

Wild years with frequently changing rules followed. Among others, today's Gyumri was under the rule of Muslim and Persian dynasties for several hundred years. 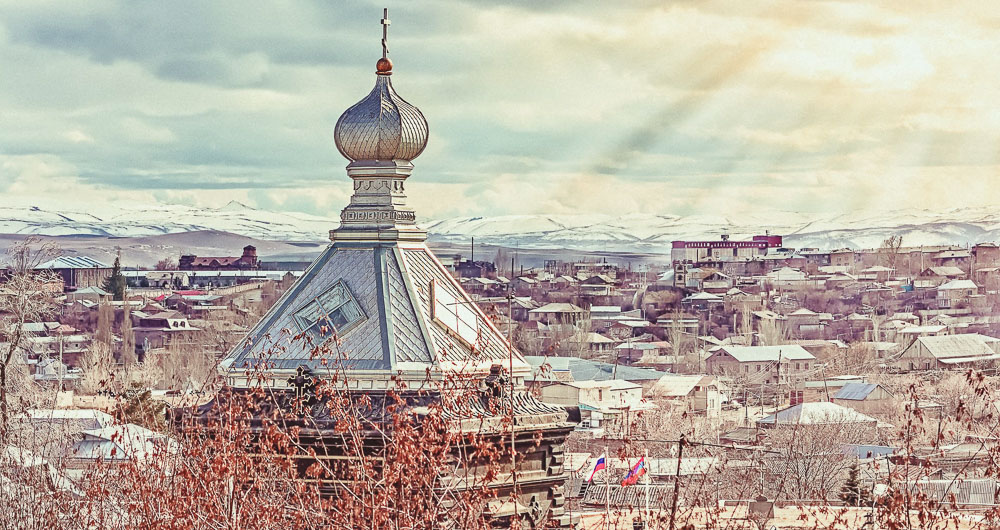 View of the town of Gyumri with the snow-covered hills in the background.

This was changed by the Russian-Persian war at the beginning of the 19th century. On 1 January 1813 Kumaryi became part of the Russian Empire. Under Russian rule, the city developed rapidly. In 1837 Kumaryi was renamed Alexandropol by Tsar Nicholas I. The Tsar did this in honor of his wife, Princess Charlotte of Prussia, who had changed her name to Alexandra Fyodorovna after her conversion to Orthodox Christianity.

The name of the town changed another three times in the following years. During the Soviet period it was called Leninakan, after the collapse of the giant empire it was called Kumajri for one year and since 1992 the town's name is Gyumri.

The devastating earthquake of 1988

The most drastic event in recent history occurred in 1988 when a massive earthquake destroyed large parts of the Lori Province in northwest Armenia. A total of 25,000 people lost their lives. The town of Spitak was particularly hard hit and was almost completely destroyed. But numerous buildings also collapsed in Gyumri.

Worth seeing in Gyumri is actually the whole historical center. The houses are built of the red and black tuff found in the region. This volcanic rock gives the old town its very own charm. In the center, you should visit Vardanants Square with its fountains and the monument dedicated to the Battle of Avarayr. 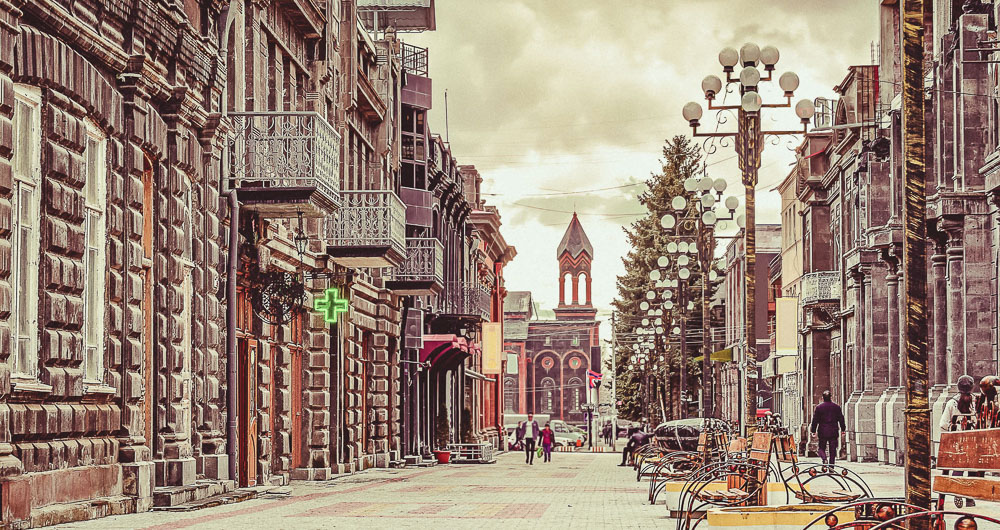 The historical center of Gyumri fascinates by its very typical architecture.

Those who want to learn more about architecture should visit the Museum of National Architecture and Urban Life in Gyumri. Already the building itself is remarkable. It was built in 1872 by the rich businessman Petros Dzitoghtsyan. The building remained undamaged during the 1988 earthquake.

Gyumri is also home to the largest church in Armenia: The 36 meters high Holy Saviour's Church was built between 1858 and 1872. The bell tower was destroyed by the Soviets in 1932. In addition, the earthquake of 1988 severely damaged large parts of the church. In the meantime, however, the imposing building is being restored again. 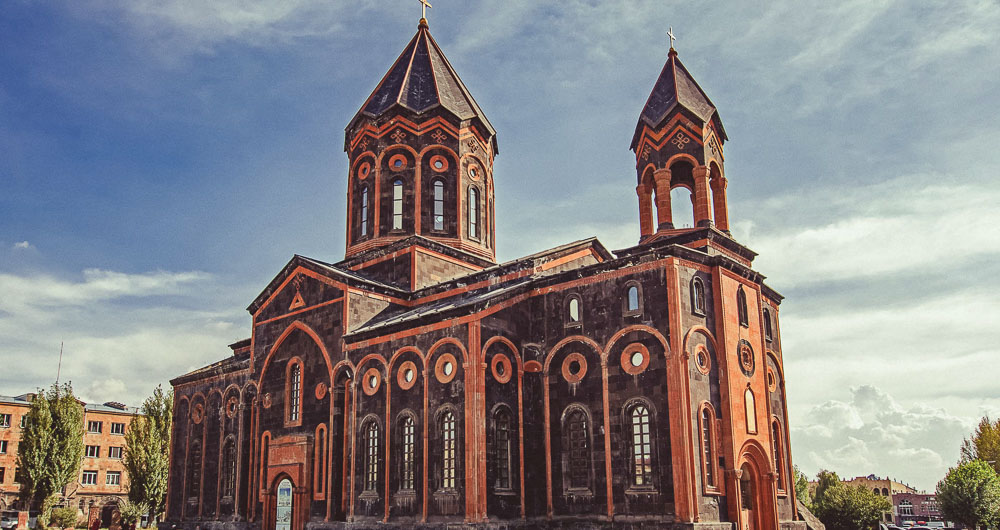 The Holy Saviour's Church in Gyumri is currently undergoing extensive restoration and should soon be open to visitors again.

Other museums worth seeing in Gyumri are the Sergey Merkurov House Museum, the Shiraz House Museum and the Mher Mkrtchyan Museum.

Gyumri also has a lot to offer from a culinary point of view. What one should not miss is a visit to the Cherkezi Dzor. The restaurant is famous for its fish specialties and even has its own fish farm.

You're interested in a private tour to Gyumri or a tour around Armenia? Contact us and get an offer without obligation from us.

How to get to Gyumri

The journey from Yerevan to Gyumri takes a bit more than 2 hours. From the Georgian border (Bavra) it's a bit less than one hour.

There are regular connections from Yerevan to Gyumri between 8 am and 8 pm. The Marshrutkas depart from the metro station Sasuntsi David.

In Gyumri, there is an airport called Shirak with direct connections to Moscow and some other cities.

Trains run regularly between Yerevan and Gyumri. On ukzhd.am, you can find all details.

Things to do in Gyumri